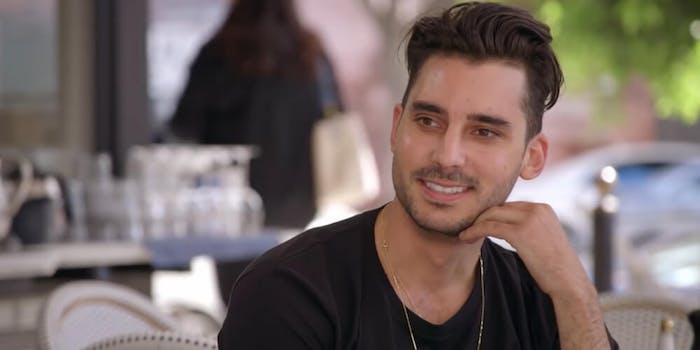 Old tweets from 2012 show that Boyens, 27, repeatedly used the N-word, which he claimed was his favorite word at the time, and made homophobic as well as other discriminatory remarks.

On Oct. 10, 2012, Boyens tweeted, “It upsets me that the word [N-word] is not allowed to be said unless you are black because quite honestly it’s my favorite word [N-word].”

Boyens quickly made his account private, but fans’ screenshots immortalized the racist tweets.

Ladies and gentlemen, Max, the new guy, from Vanderpump Rules. (Added the Scheana tweet for reference).

In another tweet, Boyens wrote, “Something about Asians that just makes me want to punch them in the suck hole.”

Other screenshotted tweets show that Boyens used the [N-word] on at least 11 other occasions.

“Theres this girl I see everyday @ school, she looks just like the girl from the movie precious & I’m not just saying this cuz she’s big and black,” he wrote in another tweet.

According to Bustle, Boyens isn’t the only new cast member to have his racist tweets come to light.

Brett Caprioni, one of SUR’s new servers, similarily used the [N-word] in a slew of tweets, dated as far back as 2011. Fans also captured Caprioni’s tweets in a series of screenshots, which can now be seen on Instagram.

It has been brought to my attention that the other new guy on Vanderpump Rules (Brett) is also a trash human.

In a statement to the Blast, Boyens apologized for the tweets.

“I want to sincerely apologize for what I tweeted in 2012 – it was wrong on every level. It is not a representation of who I am. I am shocked I ever tweeted that- and I am disgusted and embarrassed- I am truly sorry,” he told the outlet.

Boyens was introduced to the VPR fandom on Jan. 7 when the eighth season of the Bravo reality show aired. Boyens was recruited to be the general manager of TomTom, a newly-opened restaurant that fellow cast members Tom Sandoval and Tom Schwartz co-own with Lisa Vanderpump.

The Daily Dot has reached out to Bravo.