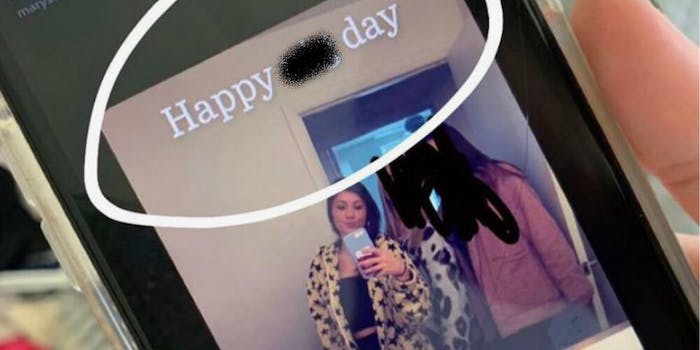 Woman no longer in sorority, school after racist MLK post

The University of South Carolina and Phi Mu have released statements addressing the incident.

A former University of South Carolina student is no longer attending the university and was dismissed from her sorority after posting a racist message to Snapchat on Martin Luther King Jr. Day.

A screenshot of the Snapchat, which was posted to Twitter, shows the student with two other women posing in front of a mirror, along with a racist message.

“Happy [N-word] day,” the message read, using a three-letter abbreviation for the N-word.

The student’s identity could not be released due to federal privacy laws, and the other two women’s faces are obscured in the picture.

A freshman at the University of South Carolina, Felicia Nguyen, saw the post on MLK Day and reported it to the university.

“I was appalled and knew I had to do something about it,”  Nguyen told WIS News. “It’s very offensive to me that especially on MLK day that this has happened over and over again at USC on a day for racial equality and social justice.”

Nguyen is referencing to USC’s history of similar incidents.

In 2018, flyers with racist language were put up in Gambrell Hall on the day after MLK Day. And in 2015, a student was suspended for writing a slur on a whiteboard.

The post drew the attention of USC President Robert Caslen. He condemned the woman’s actions in a Twitter statement.

“Earlier today, we were made aware of a social media post by one of our students that contained a disgusting racist epitaph absolutely not reflective of who we are as Gamecocks. We are taking steps to address this situation that we know is hurtful to many members of our community,” Caslen wrote on Tuesday.

Earlier today, we were made aware of a social media post by one of our students that contained a disgusting racist epitaph absolutely not reflective of who we are as Gamecocks. We are taking steps to address this situation that we know is hurtful to many members of our community.

Phi Mu, the sorority the woman was a member of, also quickly reacted to the incident.

Twitter user @ac_parham, who says she’s a USC and Phi Mu alumna, tweeted a message denouncing the woman’s “unacceptable” behavior and called for her “immediate termination” from the sorority.

“As an alumna of the USC chapter of Phi Mu, I am publicly and unequivocally calling for the immediate termination of membership of this individual. This behavior is unacceptable for anyone and does not align with the values of Phi Mu. I am appalled and ashamed, ” she tweeted.

Phi Mu spokeswoman Jackie Isaacson stated that the woman “is no longer a member of Phi Mu.”

Isaacson said that both the national organization and the local chapter of Phi Mu were “appalled by this incident and are committed to ensuring that members understand the severity of the situation.”

It is not clear whether the student was expelled, but a university spokesperson confirmed with WIS News that the woman was no longer enrolled at the school.