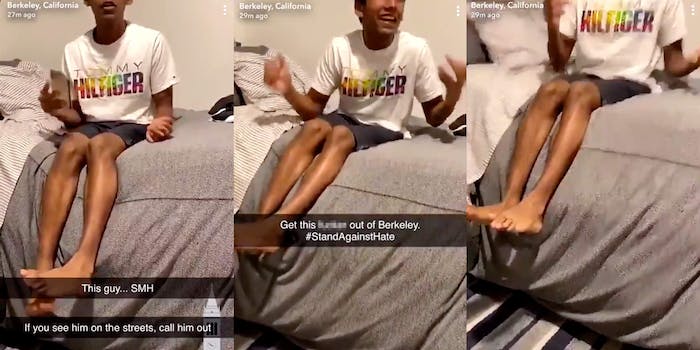 'Have you heard how bad Black people are?'

People are outraged over a video showing a student at the University of California, Berkeley using racial slurs and saying Black people, women, and LGBTQ people don’t deserve rights.

In the video, a young man is sitting on what looks like a dorm bed. As someone off-camera asks questions, the student starts talking about why he hates Black people and why he thinks they shouldn’t have rights.

“Have you heard how bad Black people are? I fucking hate them,” the man says.

The person off-camera then asks “Do you think they [Black people] should have the same rights as us?” to which the student replies, “I don’t think they should have rights at all. They’re like women.”

The video, originally posted to Snapchat, eventually made its way to Twitter where it was viewed over 3 million times. Users called for the student’s removal from the university.

In a statement shared with the Daily Dot on Friday, the university said it was aware of the video and understood people’s strong reactions to it.

“The campus is taking appropriate action in response to this video being posted on social media,” the statement said. “Due to federal laws and UC policy that protect student privacy, we do not discuss the situation of individual students.”

A Reddit user with the handle u/throwaway-berkeley claimed to be one of the students in the video and posted a statement pleading for “the chance to be forgiven.”

“The video was recorded when we weren’t in the clearest of minds,” the student said. “We recorded that originally as a joke and we impulsively posted it online. However, we quickly realized the problems and damages that this could have potentially caused, so I immediately took it down. I know that you are angry and mad at us, but we never truly meant the words that was said in the video.”