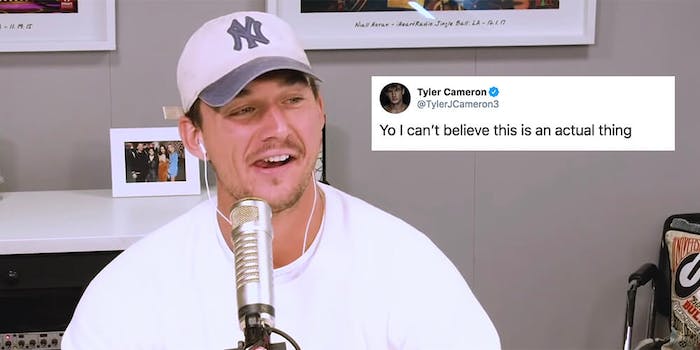 'Hey guys, can u guys comment RIP in my most recent pic because i want my gf to think i'm dead.'

There are those on social media that would do anything for viral fame. One trend is working for the clout chasers, and it involves faking your own death. Tyler Cameron, a former Bachelorette contestant, fell for it.

Cameron posted three screenshots of an extreme breakup attempt by Sergio Marroquin, a University of Texas at Austin student. Marroquin asked fellow Instagram users to comment their condolences on his most recent photo in order to have a clean breakup with his girlfriend.

“Hey guys, can u guys comment RIP in my most recent pic because i want my gf to think i’m dead, i recently moved and she wants to keep that relationship, i really want to move on,” Marroquin commented on an Instagram post.

Yo I can’t believe this is an actual thing pic.twitter.com/fkZV9KStFb

But, Marroquin is not the only one to post this exact comment, or variations of it, on a celebrity’s Instagram post. Engadget reports that this tactic has been used since 2018. The end goal brings more traffic to the clout chaser’s page, like Marroquin, with increases in likes, comments, and follows.

Cameron, who has very public experience in the dating world, was shook.

“Yo I can’t believe this is an actual thing,” Cameron tweeted.

According to the screenshots, Instagram users rallied together to “help out” Marroquin by posting comments like, “Way too soon” under his latest posts.

“My brother… We had so many great moments with the boys and now there’ll be no more…I should’ve realized Friday was gonna be the last dat we ere with you man:/ It’s a horrible thing what happened and I’m never going to get over it … Hope you’re enjoying a fat blunt down thee RIP to a real one,” one Instagram user wrote.

Like Marroquin, Cameron’s dating life has riled up the internet. After Bachelorette star Hannah Brown chose another contestant over Cameron, fans have followed his relationships with supermodel Gigi Hadid and one of Kylie Jenner’s best friends, Stassie Karanikolaou.

Twitter users, who also fell for the presumably fake breakup, responded to Cameron with their own takes.

Others asked Cameron to oust Marroquin publicly by telling his “girlfriend” the truth even though Cameron’s repost of the comment already gained over 30,000 likes by Tuesday. It seems like clout chasers have most of the internet fooled.

“Wait can you please comment on his Instagram and direct his ‘girlfriend’s’ attention to this?! We can’t let him get away with this,” Twitter user @JulieMintz wrote.

Wait can you please comment on his Instagram and direct his “girlfriend’s” attention to this?! We can’t let him get away with this pic.twitter.com/wyEk5ek5eM

Neither Marroquin nor Cameron responded to the Daily Dot by the time of publication.