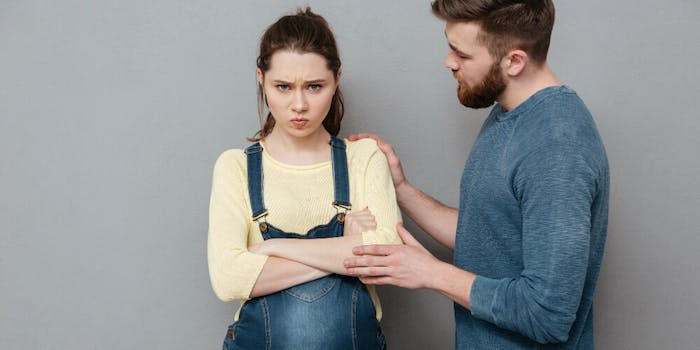 'When she got pregnant this year she continued to fight me and be hormonal to an annoying degree.'

A Redditor turned to the “Am I the Asshole” subreddit to ask if he was an asshole for “temporarily leaving my SO so she can be pregnant in peace.”

In the post, the redditor, who goes by the username tempseperation, wrote that he and his soulmate already argued “a lot” before she got pregnant.

“When she got pregnant this year she continued to fight me and be hormonal to an annoying degree,” he wrote. “I felt that this wasn’t the best for her situation as of now and left our apartment to stay with friends, and I currently plan to do this until the due date.”

He wrote that he still pays rent and sends her money specifically so that she can “endlessly watch movies at the AMC and eat out.”

He went full-on ghost-mode by cutting off all communication with her and not even letting her know where he is. He says that in doing so, he helped “pacify” her.

“She isn’t really getting mad about it, although she suspects I’m living with a woman or am just lying about where I am,” he wrote. “But I don’t really care about that since the main thing was to avoid her incessant anger and stressing about anything while pregnant.” (Ah yes, very healthy to have her think you ran off with another woman.)

Some very common-sense relatives told him that what he is doing is wrong and that he is essentially “abandoning” her. But he thought he would get a second opinion from strangers on the internet instead of just listening to them because “it seems justified to” him.

AITA for temporarily leaving my SO so she can be pregnant in peace? https://t.co/x3O9GNUmny pic.twitter.com/v5WgB2AA6v

Fellow redditors pointed out that he did abandon her and is being an asshole.

“You aren’t doing this so she can be pregnant in peace, you’re doing it so YOU don’t have to deal with her pregnancy,” one wrote.

Other users questioned if he is even capable of being a father if he couldn’t even cope before the baby was born.

“YTA – what are you going to do when the baby is born and you get annoyed by the constant crying? just leave and send her money for diapers?” one questioned.

In the comments, he later revealed what exactly they were fighting over–all very regular, petty fights normal couples seem to have.

However, eventually, after relatives and online strangers alike basically told him that he was being an asshole, he seemed to get the point. He updated his post with the following:

“I GET THE POINT, THANK YOU.

AITA for temporarily leaving my SO so she can be pregnant in peace? from AmItheAsshole