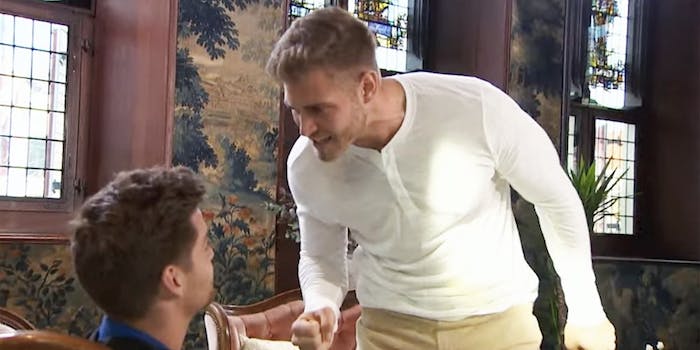 'This is a pile of bologna, look at that. That's what you've been saying to me.'

This season of The Bachelorette has been nothing if not drama-filled, but things escalated to a whole new, ridiculous level on Monday night’s episode when one contestant got a lap full of bologna.

Yes, actual bologna, as in the lunch meat, not metaphorical bologna. (Although it could be argued that there was plenty of that thrown around, too.) In case you’re getting caught up, this season’s Bachelorette, 24-year-old former beauty queen Hannah Brown, is winding down to her final group of suitors.

And unfortunately for those remaining contestants, this season’s “villain” Luke Parker, a self-proclaimed “good Christian boy” from Gainesville, Georgia, is still in the fold. Like most Bachelorette villains, Parker is disliked by the other cast mates, as evidenced by the scene that went down earlier in last night’s episode.

LOL THERE IT IS, FOLKS!!!!! #TheBachelorette pic.twitter.com/GOhzbBNwqE

“I mean you guys are in my way, just being completely real,” Parker told the remaining dudes, which got a laugh out of 26-year-old general contractor Tyler Cameron. When asked what he found so funny, Cameron basically committed straight-up murder.

“The worst thing about this, is that we have a villain, and usually the villain is some big, tall—we’ve got a five foot eight villain,” Cameron quipped.

The dig did not go unnoticed by fans.

Luke: is something funny, Tyler?

Tyler: yea, usually villains are tall, but we got a 5’8 villain

But it was later in the episode during a three-man group date that the processed meat really hit the fan.

After Hannah absconded for some one-on-one time with another suitor, Parker was left alone with 27-year-old golf pro Garrett Powell, who knew exactly how to get under his skin. After some back-and-forth accusations of tattling on one another to Hannah during their own one-on-one time, Powell eventually admitted to laying down some truth bombs.

“You disgust me,” Parker sneered. “You make me want to gag.”

“I am never, and I am not ever going to reach for anything, I’ve been nothing but truthful with Hannah,” Parker fired back, when Powell accused him of “reaching for branches” to stay afloat in the competition.

“And you are not going to mess it up, OK? I don’t care what you said to her, but I am tired of it. You know what this is, right here? This is a pile of bologna, look at that,” he said, unceremoniously plopping a pile of bologna onto Powell’s lap. “That’s what you’ve been saying to me.”

“Do you know what this is? It’s a PILE OF BOLOGNA”

#theBachelorette
Garrett after Luke throws bologna at him: pic.twitter.com/mEppYD0Dex

Luke and Garrett’s argument with no context #TheBachelorette pic.twitter.com/UlSGp1LbsW

Garrett isn't going to win Hannah's heart, but he has won mine. A+ trolling #TheBachelorette pic.twitter.com/eKllqdyDnX

“My Bologna has a first name:
It’s L-U-K-E-P” #TheBachelorette pic.twitter.com/LAu0ptLSjr

Cameron, who is still in the competition heading into next week’s hometown dates, also got a dig in:

Unfortunately, fans were not amused when Garrett ended up getting the boot because Hannah stupidly decided to go with “her heart” by keeping Luke P.

Hannah, are YOU here for the right reasons? #TheBachelorette pic.twitter.com/sRlclFxfHi

Oh no. She’s going where her heart is leading her again. #TheBachelorette pic.twitter.com/XQpOllA056

Hannah goes with her heart and chooses Luke.

CAN WE GET HANNAH TO THE TOP OF THE TRANSPLANT LIST ASAP?!#thebachelorette

On the plus side, we all know that there is actually zero chance of Parker actually winning Hannah’s heart, so in the meantime, it seems as if Powell just scored some prime, rent-free real estate in the dude’s head.