Trans*H4CK aims to put transgender developers on the map

In mid-September, a small group gathered at the Betti Ono Gallery in Oakland, Calif., to make history.

In mid-September, a small group gathered at the Betti Ono Gallery in Oakland, Calif., to make history. It was the first-ever transgender hackathon, called Trans*H4CK—an effort to join forces and create applications for an underrepresented community.

It was a think tank in the truest sense, represented across race, class, gender, and age. In that space, ideas about healthcare, privacy, outreach, and inclusion ebbed and flowed, and lack of sleep urged a whole room forward into conversations about trans rights, income equality, and discrimination.

Trans*H4CK’s founder, Dr. Kortney Ziegler, had participated in social justice–type hackathons, and thought a gathering for the trans/genderqueer/gender-variant tech community could be beneficial in heightening visibility and awareness. He reached out to allies, people in tech, and the trans community.

“The people who came were trans, gender-non-conforming, old, young—people who wouldn’t have worked together previously,” he added. 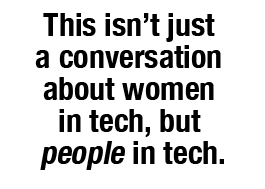 Ziegler says the goal was to create “anything that could benefit the trans community; that’s a major problem—finding resources. People don’t have access, so [the submissions] were database-driven.”

“The Dottify.me idea is to create a social media–style site and application that makes it fun and social to put yourself on the map, share some information, feel validated, visible, even if you live in the panhandle of Idaho or Memphis, Tennessee,” she says. “You can be visible but anonymous. The national survey data indicates that across all age groups, 60 percent of trans people are ‘generally out’ about being trans, at least in most areas of their life, and 40 percent are not. There is a lot of valid concern about personal privacy, and if we are to reach the most people, we have to provide for privacy concerns.”

She adds that, though Dottify.me helps put digital trans data on the map, that info is constantly evolving, across generations and state lines.

“The trans/genderqueer/gender-non-conforming community is very hard to study,” she says. “As such, I would definitely say we lack quality information, reliable data, and solid understanding. It’s a moving target, though it is evolving and diversifying year over year, so five-year-old data is almost stale.

“We see dramatic shifts in attitudes as we look at younger and younger people who are coming out, and the old ideas and words and paradigms are giving way to new ones. We also have a growing community of older, usually later transitioners who in many cases hold to older ideas about identity, community, and what is desirable and possible. The trans community has a lot of internal diversity and its share of divisions.”

Many other projects that weekend took internal diversity into consideration, like the TransH4CK ClothesR4CK, a website that facilitates clothes-swapping among those transitioning between genders; a location-based Trans*Resource Finder, to assist with resources via mobile and desktop; and a Trans Map App, to illustrate legal rights for trans people across the country.

Harlan Kellaway, one of the creators of the ClothesR4CK, which will launch in mid-2014, says the idea came from his hackathon teammate, Terrilynn Cantlon:

Terrilynn made a great point when we first presented our idea to the rest of the TransH4CK folks: a lot of trans people get rid of their clothing in transition and have to re-acquire clothes, a process that can often be expensive. The trans community is systematically disadvantaged in many ways—in acquiring necessary healthcare that isn’t prohibitively expensive, in facing housing discrimination, in facing job discrimination—and comes out worse off financially for it. Why not trade clothes among the community and alleviate some of that burden while spreading camaraderie?

Kellaway wrote a blog about attending the hackathon, and addressed the importance of making projects open-source. This idea extends to inclusion within the community. When we speak of  the importance of increasing the representation of women in tech, the trans community is often not included.

Back in September, a trans journalist named Laura Kate Dale was ridiculed by a comedian onstage at an Xbox One event, then again, later, on Twitter. That same misogynistic attitude was leveled at tech allies like Adria Richards and Anita Sarkeesian this year, which put a spotlight on a growing problem of entitlement and objectification.

For the community to truly flourish, argues the Trans*H4CK team, we can’t stick to the traditional gender binary anymore. This isn’t just a conversation about women in tech, but people in tech.

“Making projects open source is a way of sharing knowledge and encouraging participation, which are tenets of Trans*H4CK and ideas that are key for tech innovation in the trans community,” Kellaway explains:

The level of excitement over the concept of Trans*H4CK—creating tech with trans people as the focal point—was incredible. Tech specific to trans people is wanted and necessary. Making sure it’s open-source is a way of helping keep the innovation going among a population that is scattered.

Furthermore, it’s a way of displaying that tech development for trans people is taking place.

Dana McCallum, a senior engineer at Twitter, was on a panel at the hackathon. She says her “goal at things like Trans*H4CK is to be an example of a successful engineer who is unabashedly trans. I think that boosts people’s confidence and makes their aspirations more concrete.”

Tech just happens to be the circle I run in. But tech careers can also be incredibly empowering economically, an area where the trans community is struggling. And so much of tech today is about building communities, so it’s important to make sure we’re represented in those communities.

Trans*H4CK recently partnered with Mozilla for a mixer in San Francisco, and there are plans for New York City, Chicago, and Las Vegas Trans*H4CKs next year. This is all, Ziegler says, to “continue the magic in the room that weekend. To get trans people jobs and [to] be more visible.

“There are so many different genders in tech.”