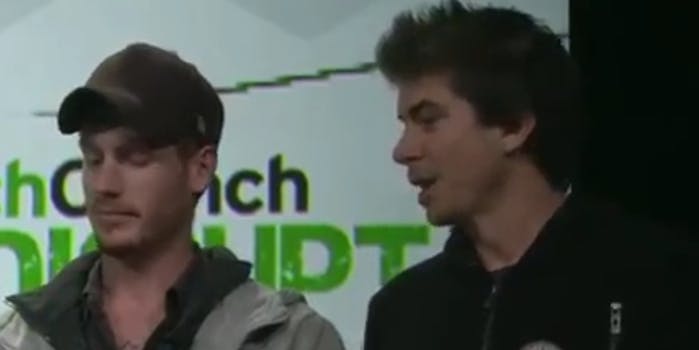 For many people, two sexist apps ruined what was supposed to be a day of fun hack presentations.

Over the weekend, TechCrunch hosted its Disrupt SF 2013 hackathon, which presented a day’s worth of new app demos to attendees. It included a demo by 9-year-old Alexandra Jordan, for an app called Super Fun Kid Time, which schedules playdates for kids. There was also a presentation for an app called Titstare, which kicked off the hackathon.

Two Sydney-based developers named David Boulton and Jethro Batts delivered a minute-long demo on the app early Sunday. It allows users to take photos of themselves “staring at tits,” which will, according to their “science,” combat the declining life expectancy of men, which is related to women stubbornly covering up their only asset, cleavage. The demo also featured several awful breast puns, and the duo chuckled like Beavis & Butthead.

“Normally our hackathons are a showcase for developers of all stripes to create and share something cool. But earlier today, the spirit of our event was marred by two misogynistic presentations.

Sexism is a major problem in the tech industry, and we’ve worked hard to counteract it in our coverage and in our own hiring.

Today’s issues resulted from a failure to properly screen our hackathons for inappropriate content ahead of time and establish clear guidelines for these submissions.

Trust us, that changed as soon as we saw what happened at our show. Every presentation is getting a thorough screening from this hackathon onward. Any type of sexism or other discriminatory and/or derogatory speech will not be allowed.

Here’s what the father of 9-year-old Alexandra Jordan had to say about the experience:

There goes my attempt to teach my 9yo girl how welcoming tech industry is to women :-/ cheers Aussies & wank app guy @tcdisrupt #hackdisrupt

To TechCrunch’s credit, their quick response diffused a larger reaction. They agreed it was a bad idea, and that misogyny exists. However, what gets past screening is a bit more troubling, especially in light of similar sexist incidents at PyCon, E3, and the Penny Arcade Expo. All projects had to be registered beforehand. According to Tsotsis, an anti-harassment policy is being discussed, but it’s unfortunate one was not already in place for such a big event.

.@pahlkadot @eldon Until today we did not have a formal system of hack screening. This has gotten too big to not have strict controls.

Kimberly Bryant, founder of Black Girls Code, was in attendance with her daughter, and sat through the Titstare presentation, while waiting for her students’ demo. She explained that Adria Richards, who was fired from her job at SendGrid after the PyCon “dongle” incident, presented right after Titstare.

“Talk about irony,” she told the Daily Dot. “I cringed even more for all she has been through.”

She said that “out of [an] audience of several hundred coders this weekend, there were just a handful of women coders, but there were several young women, including our [Black Girls Code] students.”

“I’d certainly like to see more women and a diversity of coders attending these events,” she added, “but surely it’s a must that these environments must be more welcoming to women.”