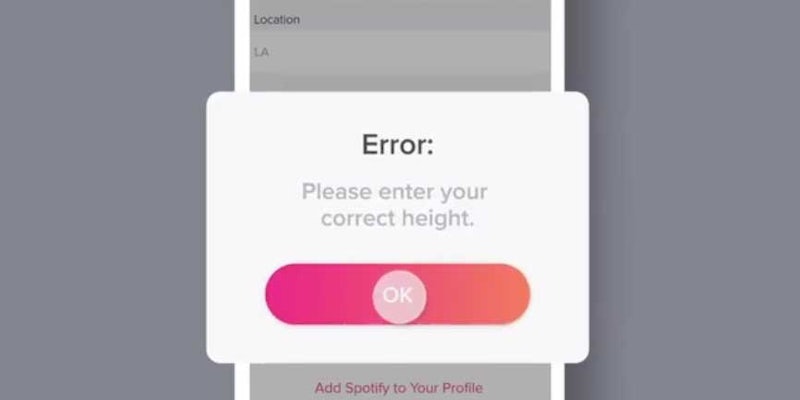 Some just don't get it.

Men across the internet are fuming after Tinder announced it was introducing “height verification” to stop men from lying about their measurements on the dating app. Tinder dropped the news on Friday and seemingly ruined the weekend for many dudes who have no sense of humor or understanding about double standards.

“It’s come to our attention that most of you 5’10ers out there are actually 5’6. The charade must stop,” Tinder’s press statement read from Friday. It said it was only applying this in the U.S., as it predicts “a huge decline in the 80% of males on Tinder who are claiming that they are well over 6 feet.”

What people (i.e., angry men) didn’t seem to realize was that it was an early April Fools’ joke. And their reactions are priceless. Like many men tend to do when they feel attacked, they chose to pick on women.

Cool with this. Just add a weight verification as well for the ladies who love to show those old pics!

there’s nothing wrong with liking taller men. The thing is, some women use editing software to make them look thinner. Or they either have older pictures or just take face selfies. If you’re going to appeal to women crowd, then appeal to the men crowd as well

Men are oppressed. I don’t see a weight verification.

Others were just very, very angry.

I wasn’t getting any matches before and now you’re absolutely sabotaging every hope I have for some in the future. This is disgusting and I will not stand for it.

Some at least understood the hypocrisy of body-shaming even if they didn’t get the joke.

That's not the point, of course men can be fat.

If men asked for weight verification, we'd be vilified. It's all superficial bullshit. Just love the hypocrisy.

Some actually did have a sense of humor.

this tinder height verification system is sending me, men's profiles bout to start looking like this lmaooo pic.twitter.com/d9vrWrxKQT

All the 5’4 guys seeing tinder is adding height verification https://t.co/ueCPVav1JF

Some just wanted to correct Tinder for showing a foot equaling 10 inches.

LOL if it weren't superficial enough already.
Also, FYI tinder… there are 12 inches in a foot.

why… why are there only 10 inches in a foot

If anything, it really revealed what people apparently lie about on Tinder.

Is there a way to verify if a person is really sapiosexual?

We also need titty verification. I don't wanna be melon-fished

And some deep-seated prejudices.

When are you going to let people filter by weight and race? pic.twitter.com/stmhp4Gw6B

thank you. short men need to be oppressed.

“To celebrate April Fool’s Day, we wanted to raise awareness that really only 14.5% of the U.S. male population is over 6′ despite the many Tinder bios claiming otherwise,” Jenny Campbell, CMO of Tinder, told the Daily Dot. “This caused quite a stir among our users, and while we aren’t really verifying height, we do encourage people to stand proudly in their truth when filling out their bios. And conversely, we encourage all Tinder users to keep an open mind while swiping. Sometimes your most unexpected match can lead to amazing things.”

While there’s virtually no data on women’s preference for height in their male partners, anecdotal reports show it varies—for some women, it matters, and for many, it doesn’t. Not that it’s just a women’s preference thing, either. As seen in these recent surveys by VICE and Elite Daily, some men freak out about their partner’s height if they’re taller and ask them to tone it down.