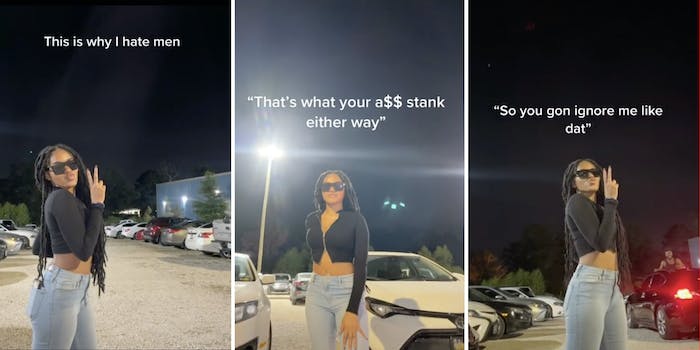 ‘This is why I hate men’: Man tells TikToker her ‘a** stinks’ after she rejects him in viral TikTok

TikToker Justine Thang was in the middle of filming a video when, like something out of a TLC song, a man decided to holler at her from the passenger side of a car. When she rejected him, however, his attitude did a complete 180.

The entire saga was caught on camera.

The video opens with Thang, @znc_justine on the platform, posing in a parking lot at night when the car pulls up and stops nearby her. “Hey,” a man shouts from the vehicle.

“So you gon’ ignore me like that?” the man questions.

The video then cuts to Thang in another part of the parking lot. Thang’s female companion says “You don’t want us.”

The same man, this time off-camera, says: “What, your ass stank either way.”

The two girls just laugh the remark off and sarcastically agree with the man.

“This is why I hate men,” text overlay on the clip reads.

In a caption on the video, Thang calls the men “little boys” and notes the man got “mad because we didn’t want to give him any attention.”

Many of the commenters remarked on how the man’s actions after being rejected is an all too common experience women have to deal with. “He so hurt lol this is so common it’s not even shocking no more,” one said.

The Daily Dot has reached out to Justine Thang.