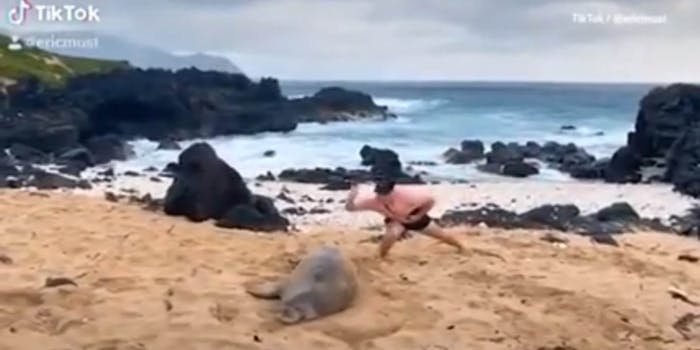 In the video, he can be seen slapping a sleepy, sun-basking monk seal.

Earlier this year, a video cropped up on TikTok that showed a tourist in Hawaii slapping a sleepy, sun-basking monk seal. Now, the internet is overjoyed to find out he has officially been hit with a fine.

According to Newsweek, the tourist—who remains anonymous, per the recommendation of his attorney Blake Long—had to pay both state and federal fines for his misdeeds, which violated the Endangered Species Act.

On behalf of his client, Long released an apology in the local newspaper, calling the behavior “immature” and “inexcusable.” He also expressed hope that his clint’s poor choices, and the consequences that followed, could serve as a reminder to other visitors not to mess with local endangered animals.

“While this is an incident that my client wishes to leave behind, he is also hopeful that his mistake will be used as an example of the types of conduct tourists must avoid,” the statement read. “To all who were dismayed at my client’s actions, please accept this apology.”

The video circulated on TikTok and Instagram back in February after being uploaded by user Eric Mustevoy. The clip shows a man slapping the seal, while the song “Smack That” by Akon plays in the background. It went viral after a popular Hawaiian Instagram handle @hungryhungryhawaiian shared it with its 270,000 followers, stirring outrage.

At first, Mustevoy tried to deny knowing the man featured in the video.

“I just witnessed some guy doing it and captured it on camera,” he reportedly told Maui Now. “I was just recording the video and I noticed some people taking pics with it and this guy just ran and did it. I would never do that in the first place. And I wouldnʻt be stupid to post it if I did it. Because I know itʻs illegal. But I was wrong of posting it.”

It didn’t take long for Mustevoy to release an apology via Instagram. He also wanted to make it clear that he was not the man guilty of slapping the seal, though many assume the man caught in the video is his friend Alex Tsvor, because the original video was captioned, “@alextsvor got me into tiktok.”

“I wanted to make a public apology for the video I had posted of the Monk Seal when I was visiting Hawaii,” he wrote in the since-deleted post.

“It’s hard for me to find the right words given I was completely in the wrong. First and foremost, I would like to make it known that it was not me in the video however, I should not have even for a split second, thought it was okay to post something so disrespectful,” Mustevoy explained.

It remains unclear just how much Mustevoy was forced to pay for violating the sleeping monk seal.