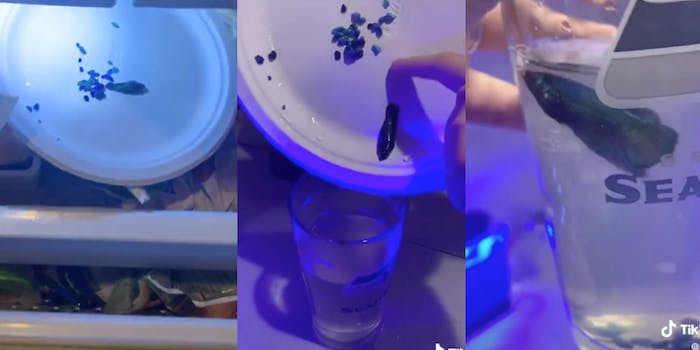 TikTok user claims she resurrected her dead fish in this video

In the video, the girl takes her 'dead' fish out of the freezer and plops it into saltwater. The fish then appears to start swimming.

A TikTok video that shows a user’s betta fish being brought “back to life” in saltwater has people online questioning whether her pet actually died.

The video, created by TikToker Lyla, @lylach, shows her removing her “dead” betta fish from a freezer drawer and depositing it into a glass of saltwater, where the fish eventually begins to swim. However, as many commenters noted, there are a few things that don’t quite add up.

First, betta fish are freshwater fish, meaning that they likely wouldn’t thrive in saltwater. While the fish do have “labyrinth organs,” allowing them to breathe for short periods of time out of the water, they don’t have any adaptations that would make them comfortable in saltwater.

There is precedent for very cold fish reviving, such as this 2018 video of a fish market in which a tuna is taken from the ice and placed in a bucket of water, where it begins to swim. This fish was not frozen but kept on ice. Certain species of fish do survive in frozen or near-freezing temperatures, during what is called an “overwinter” by the NOAA. They will go dormant, often burrowing into sand or hovering in large groups, and “revive” when the water warms up or thaws.

Some users commented on the TikTok saying that the saltwater triggered muscle spasms in the dead fish, giving the appearance of swimming again. This phenomenon is known as “Zombifying” the fish, where adding salt to exposed nerves in freshly cut fish causes the nerves to contract, precipitating muscle spasms in the fish.

“No… the fish is definitely dead,” TikTok user @psychobrat64 commented. “The nerves are just going crazy because of the salt. It’s like putting soy on a dead squid.”

An even larger number of commenters believe her fish hasn’t died at all. Rather, many posit she simply put her fish on a plate, put it in the freezer, and removed it once she began filming.

“The plate is pretty wet for being put in the ‘freezer,'” TikTok user @alex.adulting wrote. “It also flinched when she scooted it downwards to put it in the salt water. Fish abuse.”

Small movements of the fish before she plops it into the water are being pointed out in the comments section as evidence.

“I saw it move before u put it in the water,” TikTok user @therealjorgeee wrote. “Mam please tell me u did not put that fish alive in the freezer.”

Given the evidence, it’s unlikely that this video authentically shows someone reviving a fish. The jury is still out about whether or not this constitutes animal abuse.