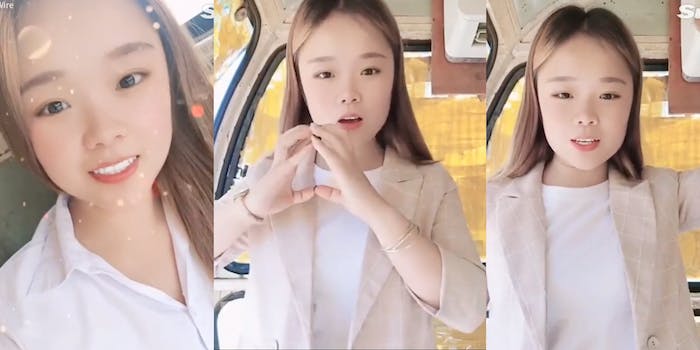 She reportedly still had her phone in her hand when she landed on the ground.

A 23-year-old TikTok star died after falling 160 feet while operating a crane.

Xiao Qiumei made a living working as a crane operator, and it appears that she was filming a live stream when she fell. It’s reported that she still had her phone in her hand when she landed on the ground below her crane.

Footage of the fall was published the Sun, which reported that Xiao gained 100,000 followers on the Chinese version of TikTok, Douyin.

Her family described her as diligent and professional at work, according to Meaww.

“Even though a viral video has caught Qiumei’s tragic fall to the ground, her family insists she was diligent and professional about her work and couldn’t have possibly used a phone during her shift operating the crane,” Meaww reported.

According to the Sun, her family stated that she made a “misstep,” which resulted in her fall.

She was also the mother of two young children. A funeral has also already been held for the content creator.

Xiao joins multiple people who have died while making content for social media. Just this month, another influencer, Sophia Cheung, 32 of Hong Kong died after she fell while taking a photo near a waterfall.