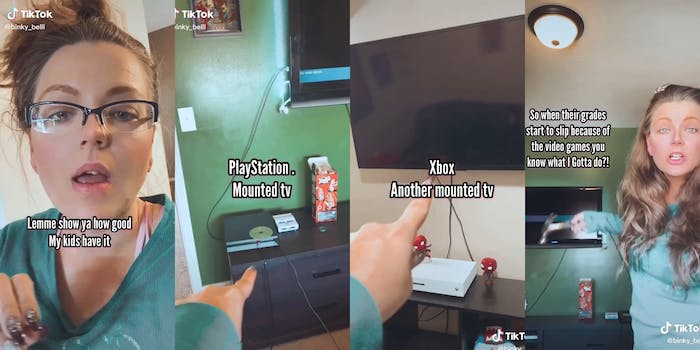 'This is the type of mom we all need.'

Social media users are dubbing a TikTok mom the “anti-Karen” after she posted a viral video about her positive parenting techniques.

The video, posted by user Binky Bell (@binky_belll), has received more than 760,000 views since it was uploaded two days ago. Bell takes viewers on a quick tour of her house to show “how good [her] kids have it.” She shows off flat-screen TVs, gaming consoles, headsets, and a gaming PC that her kids are free to use.

The video threatens to take a comically dark turn when Bell picks up a hammer, stands in front of one of the TVs, and says to the camera, “So when their grades start to slip because of the video games, you know what I gotta do?”

Viewers might think they know what comes next, but instead of hurling the hammer at the TV (and wasting a ton of money for the sake of internet clout), Bell flips the script.

These affirmative parenting techniques are consistent with Bell’s career. Per her LinkedIn, she’s a podcaster at Paradigm Shift Parenting, where she “create[s] content to motivate and inspire women to be active, intentional creators of their lives and push back against the narrative that mothering has to be difficult.”

Bell has received tons of positive feedback from other TikTokers following the video.

“THANK YOU! So refreshing to see sane parents who treat their children like people with complex emotions,” @jadegraco commented.

“I’m so happy the response to that video has been so positive,” Bell tells the Daily Dot via email. “I hope that it helps to destigmatize the relationship that children can have with technology. I think it’s important to understand that gaming and tech can be valuable tools in a child’s life and education. Technology isn’t slowing down, I think it’s more beneficial to model responsible use of electronics and healthy boundaries with it from a young age.”

Bell’s video also made it to the r/FuckYouKaren subreddit, where it has earned more than 43,000 upvotes and earned Bell the prestigious title of “Anti-Karen.”

“She sounds reasonable, rational, and, dare I say it? Normal,” u/C0JeepRenegade wrote. “Nobody is like that anymore.”