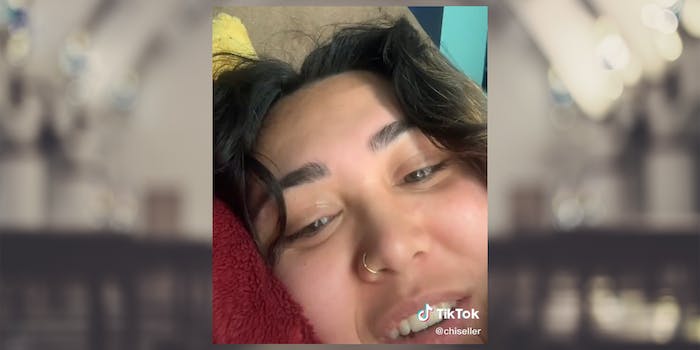 ‘Then you pack up and get out then’: TikToker films father threatening to kick them out if they don’t go to church

'Just get up and go to church.'

There are many differing viewpoints between generations, and one of the biggest is religion. A recent viral TikTok video displays this intergenerational tension between one user and their father.

TikTok user @chiseller shared a recent interaction with her father who threatened to kick her out if she did not go to church with the family. The video captioned, “POV: you’re just trying to enjoy your sunday when you are faced with a dilemma: go to church or move out,” shows @chiseller in bed as her father demands she get out of bed and join the family at church.

“All I’m asking is today, can you—can we go to church as a family. That’s all I ask,” her dad says offscreen.

After the user in bed says no, her father responds, “Then you pack up and get out then. I mean, you know we don’t ask much in this family, especially me. All I ask is you go to church”.

“For why? Why we don’t spend time together as a family any other day,” @chiselle retorts.

“Don’t try to argue with it now, just get up and go to church,” her father demands, slamming the door as he exits.

The comments of the video express frustration over the user’s dilemma.

“‘I don’t ask for much except for you to compromise your beliefs and morals and values,’” one commenter mocked.

In subsequent videos, @chiseller responds to comments about the situation and adds more background. She emphasizes that she did not mean to disrespect her father and asserts that they have a good relationship.

“Honestly he is one of my biggest advocates for real. He’s not this big bad guy that everyone’s trying to paint him to be,” the TikToker says.

In a later video, she says their disagreement stems from “toxic masculinity” perpetuated by Modern American Evangelism.

She explains that she grew up as a “missionary youth” spending large amounts of her time in church. She states that she left the church at 17 after years of dealing with the toxicity.

“It was like a personal exodus for me I guess you could say,” she says.

The Daily Dot reached out to @chiseller via TikTok comment but did not immediately hear back.