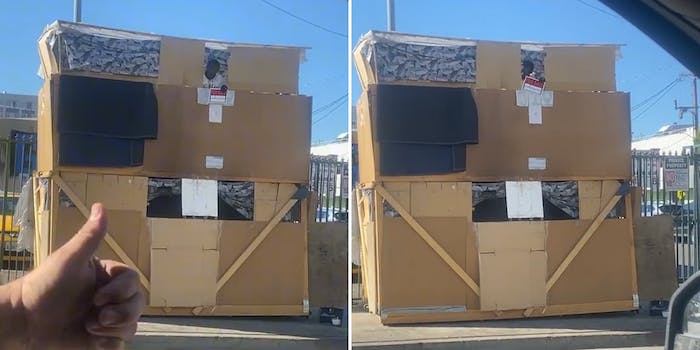 A viral TikTok video shows an unhoused man waving from what looks like a two-story cardboard fort in downtown Los Angeles.

In the caption, TikToker @hoodstockpodcast called the fort a “cardboard condo.” The footage garnered nearly 450,000 views on TikTok by Thursday.

Some commenters made light of the cardboard condo and cracked jokes, while others said it was a sign of the country’s state. Los Angeles news publication Laist reports that in 2020, there were more than 43,290 unhoused people in the city.

“#ThisIsAmerica,” one viewer commented on the video.

Some viewers made sarcastic guesses about how much it would cost to rent or buy the cardboard condo given its premium location in downtown Los Angeles, where the median home price is over $627,500.

Another viewer commented, “On the market in LA for a modest 250k.”

“Just found it on trulia [a real estate website], 90k,” another TikToker joked.

“That’s the Ritz Carboardton!” someone wrote.

Several viewers commented that they wanted a tour of the condo, and some said they were surprised at the apparently functioning stairs.

The Daily Dot reached out to @hoodstockspodcast via TikTok comment.