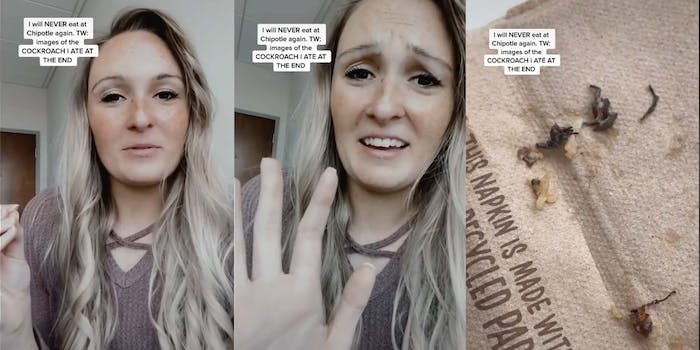 ‘What I ate was very bitter’: TikToker says she found beetle in her Chipotle burrito

She thought it was a cockroach at first.

In a TikTok posted on July 8, user Tori Kinley says she found a cockroach in her Chipotle burrito, which she later said may have been a beetle instead. She said she bit into something crunchy and thought it was corn. When she spit the item out, though, it was apparently an insect leg.

“I swallowed the rest of it,” Kinley says in the video.

In the video, Kinley says she called Poison Control and was told that consuming a cockroach wasn’t fatal but that she should expect food poisoning.

In a later video, Kinley said that she thinks she ate a beetle instead of a cockroach. “Apparently cockroaches taste like shrimp, whereas beetles are bitter. And what I ate was very bitter,” said Kinley, who also confirmed she didn’t get food poisoning.

In another video, Kinley also said that she took the bug remains back to the Chipotle location where she got her burrito, and they “didn’t do anything.” By the time she returned to the Chipotle, the bug’s remains had “shriveled up,” causing Kinley to assume she ate a live bug.

In a final follow-up video posted almost a month after the incident, Kinley said that Chipotle eventually offered her free meals.

“I think because the video’s circulating, that caught their attention,” said Kinley. “However, I’m not sure I want to eat at Chipotle anymore.”

The Daily Dot has reached out to Kinley and Chipotle.