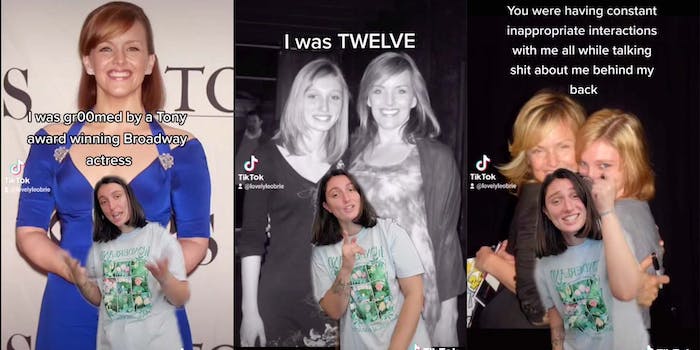 Several online users lodged accusations against the 'Next to Normal' star.

In a TikTok posted on Thursday, TikTok user @lovelyleobrie says she was groomed by Broadway actress Alice Ripley, who is known for the Tony Award-winning musical Next to Normal.

“You were having constant inappropriate interactions with me all while talking shit about me behind my back,” writes Brie Lynn (@lovelyleobrie) in the video. The TikTok features photos of Brie Lynn and Ripley. Brie Lynn states that she was 12 and 13 years old in the photos.

Brie Lynn also says that Ripley told her that when the “first time” they “locked eyes the world stopped.” Brie Lynn says she was 13 at the time.

Brie Lynn further alleges that Ripley “separated” her from all her friends and didn’t protect her when an “insane fan” of Ripley’s “tried to kill” Brie Lynn. (In a follow-up video, Brie Lynn explains that another fan of Ripley’s got violent with her.)

According to the Rape, Abuse, and Incest National Network, grooming is definited as “manipulative behaviors that” abusers use “to gain access to a potential victim, coerce them to agree to the abuse, and reduce the risk of being caught.” Grooming also involves building trust with a younger victim and potentially isolating them from their family and friends.

Other manipulative behaviors, according to Lynn, included the ways Ripley spoke about her to others.

“It was made abundantly clear to me during my communication with other former fans that Alice had, at times, spoken of me as being nothing more than an obsessed fan that wasn’t truly close with her,” Brie Lynn told the Daily Dot. “She was attempting to create a narrative that I was a problem fan, despite these same fans witnessing her fawning over me at concerts and around the theater.”

After Brie Lynn posted her initial video, similar accusations against Ripley rolled in on Twitter and in the comments section of Brie Lynn’s TikTok videos.

Other former fans of Ripley’s shared that they had interactions with the actress online when they were teenagers.

Leo, who declined to share her last name, told the Daily Dot that she had “intimate” conversations with Ripley when she was 17 and 18 years old.

“[There were a] few messages where I would say something about how much I appreciated being a ‘mom figure’ in my life and she’d reply telling me how special I was to her,” Leo said. When Leo later got into a relationship, Ripley disconnected with Leo on social media, “stopped acknowledging” her and “refused” to contact her.

A former fan of Ripley’s who prefers to remain anonymous told the Daily Dot that she met Ripley at the Next to Normal stage door in 2009 and tweeted at Ripley. The fan says Ripley liked many of her tweets and eventually followed her back on Twitter. The former fan said she was “16 or 17” at the time.

“It just feels weird now,” said the former fan, who said that her memories of Ripley are now upsetting in light of the recent news.

“I found it weird at the time since I don’t believe I was even following her on social media,” said CJ. She said she was 15 or 16 when Ripley blocked her.

Brie Lynn and Ripley did not immediately respond to the Daily Dot’s request for comment.

Update 2:11pm CT, Aug. 26: This article has been updated with Lynn’s statement about her previous interactions with Alice Ripley. A previous update misidentified the source whose statement was added.