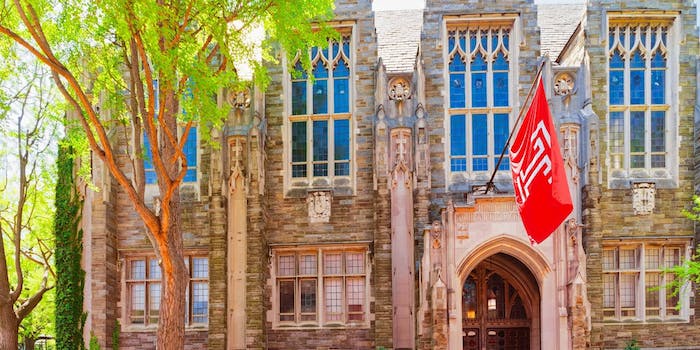 Temple student refers to Philly as the ‘ghetto’ in ‘unacceptable’ TikTok

Temple University is addressing a TikTok posted by a person claiming to be one of its students.

In the TikTok, the person filming—a young white man—refers to the area surrounding the campus as “the ghetto.” The 10-second video shows a young white man in front of an image of the school, before the video changes to images of rowhouses. Some of the buildings have windows boarded up. In the background of the video, audio from The Real Housewives of Atlanta can be heard, including Nene Leakes repeatedly saying the word “ghetto.” The video is captioned with “going to a city school and walking two blocks off campus for a party.”

The video was quickly deleted from TikTok, but has stirred outrage on platforms. Other users captured the video and shared it with Temple University on Twitter. One claimed the student in question was an “owl team leader” who was spreading “hate, bigotry and enforcing racist stereotypes.”

Thank you for reporting this to us. This is unacceptable and deeply concerning. It is currently being addressed.

The university wrote in a post on its official Twitter page that the matter is “currently being addressed.” The tweet referred to the video as “unacceptable and deeply concerning.” The school has not given any updates on the student in question, but a spokesperson, Raymond Betzner, confirmed to Inquirer that they were recently provisionally accepted into the school’s Owl Team. Members of the team welcome new students to the university, assist them in the process of getting settled and serve as positive role models and representatives of the school.

Regarding disciplinary action, Betzner said the school always approaches such things with education in mind. “Education is always our first pathway,” he told Inquirer. “We find that when you sit down and you talk to students very broadly and allow them the opportunity to get to know their community better their perspective changes.”