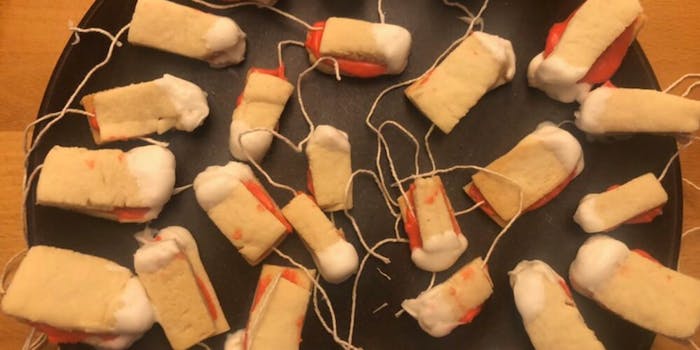 The principal said students would ‘abuse the privilege.’

A middle school principal denied his students’ requests for free tampons in the bathrooms, and they’re protesting in the sweetest way: with tampon cookies.

People have long argued that menstrual products should be free, or at least counted as a medical expense on taxes. After all, they’re a hygienic necessity. It’s not easy to go about your day if blood is running down your legs. Unsurprisingly, not having access to menstrual products keeps some kids in poverty from being able to go to school consistently, according to Global Citizen.

Even if you’re not in poverty, not having access to pads or tampons when a period strikes can be a horrifying situation, even more so if you’re a young teen new to menstruating. At one middle school, students tried to solve this problem by requesting that free tampons be provided in the bathrooms at the school. But the administration wasn’t receptive.

“My friend’s 7th grader goes to a school where the kids organized for free tampons in the bathroom,” Ilyse Hogue, president of NARAL Pro-Choice America, tweeted on Tuesday. “The male principle said no because they would ‘abuse the privilege.’” Rather than giving up, the middle-schoolers came back with a more creative way to get people’s attention: tampon cookies.

My friend’s 7th grader goes to a school where the kids organized for free tampons in the bathroom. The male principle said no because they would “abuse the privilege.” The kids decided to stage a cookie protest. Behold the tampon cookies! pic.twitter.com/jz2KtbhOhS

“Behold the tampon cookies!” Hogue said, sharing a picture a plate of wafer cookies with red and white frosting. A single string hangs off each piece. Twitter users congratulated the students on their thoughtful and eye-catching protest and wished them luck in getting the change they’re demanding. Others shared stories of how similar situations were handled at their schools.

I as in the restroom restocking the shelf when some guest students came in. They were excited to start a similar shelf in their school. If we give the kids an opportunity, they will be kind and generous.

I am obsessed with this and the kids at this school??
Love to be reminded that the kids are DEFINITELY alright

So creative and awesome.

Amid celebrations for the tampon cookies, there was one pressing question: What on earth could the principal mean by “abuse the privilege?” Is he imagining that they’ll be used for pranks? By that reasoning, students should also provide their own toilet paper. Some suggested that students could take more than they need and sell them—but who would buy them at a school that provides free tampons?

How do you abuse the privilege of tampons being there when you need one?

Maybe the girls should demonstrate that they are not taking advantage of free tampons by returning them to the principal when they are finished with them.

Is he afraid girls are just gonna start having periods for fun?

Whether the principal will ever explain what he meant and whether the tampon cookie protest will be effective remains to be seen.

The Daily Dot reached out to Hogue for comment.