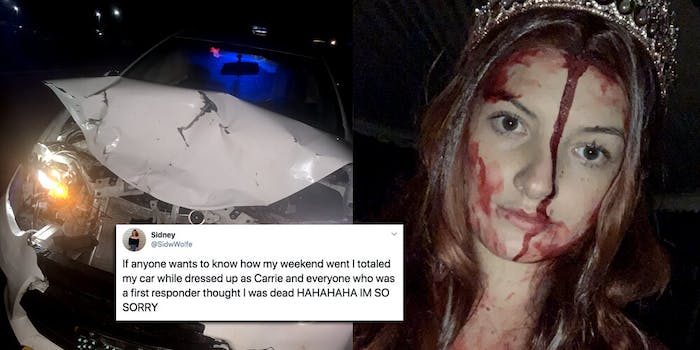 How much fake blood do paramedics see during Halloween?

Halloween is the most exciting time of the year, but also a time when it’s hard to tell what exactly is real and what’s actually a disheveled art forger dressed up as a ghost to scare away those pesky meddling kids.

Or in some cases, who’s bleeding all over the place and who’s just dressed up like a character from a Stephen King novel.

That’s exactly the dilemma paramedics were faced with when they responded to the scene of a (very real!) car accident over the weekend. Sidney Wolfe shared the story on Twitter, saying she was dressed up as Carrie White after her bloody revenge at the high school prom to promote Carrie the Musical at a haunted house.

“At the end of the night, I was too tired to shower and remove my makeup,” she wrote.

Unfortunately, as she was on her way home, a deer ran out into the road and she totaled her car. And when the first responders arrived, they were met with a scene that looked far more gruesome than it actually was.

If anyone wants to know how my weekend went I totaled my car while dressed up as Carrie and everyone who was a first responder thought I was dead HAHAHAHA IM SO SORRY pic.twitter.com/22vatX7nGB

“Everyone who was a first responder thought I was dead,” she wrote, alongside a photo of her very believable makeup and a totaled car.

Once she convinced everyone that she was fine, Wolfe says she was waiting for her parents to pick her up and just chatting up the paramedics. But each new person that arrived at the scene was floored by how casual this totally bloodied up girl in a prom dress was acting.

“Next came the police officers who were like ‘oh man’ and kept asking over and over again if I needed medical assistance,” she told HuffPost. “The second round of cops that came weren’t in on the makeup and said, ‘Are we just gonna ignore that blood is dripping and she needs medical assistance?’”

Of course, everyone knows Carrie the Musical always needs any publicity it can get, and Sidney appears to be too smart to waste her fifteen minutes of viral fame.

I risked my life to promote this musical. Y’all better buy tickets!!!!! pic.twitter.com/vpRvKFBZ47

Wolfe is apparently playing good girl and sole survivor of the prom night massacre Sue Snell in the production and just happened to be filling in for the actress playing Carrie in the haunted house. Unfortunately, between her and the deer, she was also the sole survivor of the car crash.