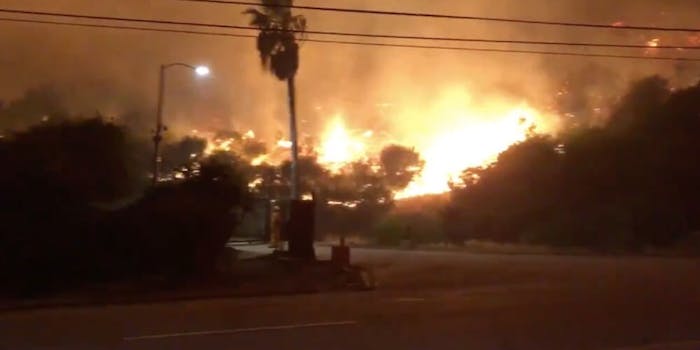 Thousands have evacuated the area.

As wildfires ravaged California’s Sonoma County and locals evacuated, a couple from Chicago arrived for their wedding. A photo of the newlyweds with masks over their faces as fires raged a couple miles away has since been widely shared on Facebook.

The photo by Karna Roa of KMR Photography is drawing attention to the ongoing wildfires in California. The fires have caused thousands of people to evacuate and threatened thousands of structures.

“This looks like a gorgeous ad for climate change,” one Facebook user commented on the couple’s vineyard photo.

“Katie and Curtis – along with all of their guests – were forced to evacuate…They came to San Francisco and within hours someone broke into Katie's parent's car. Thousands of dollars of laptops, iPads and other merchandise from her family were stolen.” https://t.co/tNH76Dpf9L

The couple told ABC News that because of the fires, they replanned the wedding just hours before the event. The wedding staff was a  “skeleton crew” as many staff members and vendors were forced to evacuate, ABC reported.

But despite the setbacks, the couple married on Saturday at Chateau St. Jean Winery while major wildfires burned just miles away.

The wildfire around Sonoma County started earlier last week and is only 15% contained. It’s the largest California fire of 2019. Meanwhile, southern California is also under “critical weather conditions” as active fires spread throughout the region.