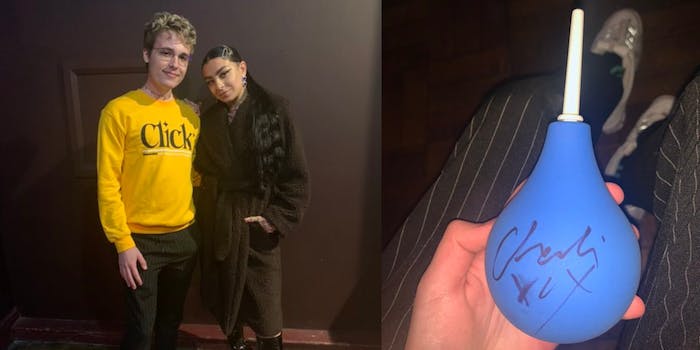 Charli XCX fan criticized for asking her to sign their douche

It's being called sexual harassment online.

As meet-and-greets become more common among popular artists in the age of social media and over-sharing, we are privy to the strange requests some fans make of their favorite stars. In the case of Charli XCX, fans have put in some genuinely odd ones. Earlier this month, one fan asked her to pose with his mother’s ashes. She graciously obliged. Another requested a short video of Charli posing with a bottle of amyl nitrate—also called a popper—saying “gay rights.” Again, she obliged.

This week, however, the 27-year-old musician received what is likely the strangest request yet. A fan asked her to sign their douche—and Charli reportedly agreed.

The *lucky* fan, who goes by marcus on Twitter, wrote in the comments of their post that Charli didn’t seem to know what the douche was. When one user asked if she knew what she was signing, marcus responded in the negative. “No I asked her to hold my poppers to my nose and she politely declined which I respect,” they wrote. “So I asked if she would sign this and she was like what is dis hunny.”

In part due to Charli’s apparent lack of context, some fans are considering the incident to be sexual harassment. Douches, which are used far more rarely than they used to be, were originally developed to help with women’s feminine hygiene. The practice has been largely abandoned, as most doctors recommend against women douching. In the gay community, douching is sometimes used by men for a similar purpose. Considering the nature of the tool marcus asked Charli to sign, many fans quickly condemned the request.

Comments like “this is so disrespectful” and “congrats on sexually harassing her” dominated the conversation.

Yall most want her to quit music

this is so disrespectful…

Congrats on sexually harassing her😑

That’s an appalling thing to do to a person. Not funny in any situation. Disgusting.

I don’t find it funny at all, just disrespectful. There’s no one saying she have to do M&Gs, she does it because she probably wants to and honestly, I feel so bad for her. First a dude’s mother’s ashes and now this. She really deserves more respect.

Those commenters who were unaware of douching got a full education in no time. Charli has yet to comment on the alleged incident.