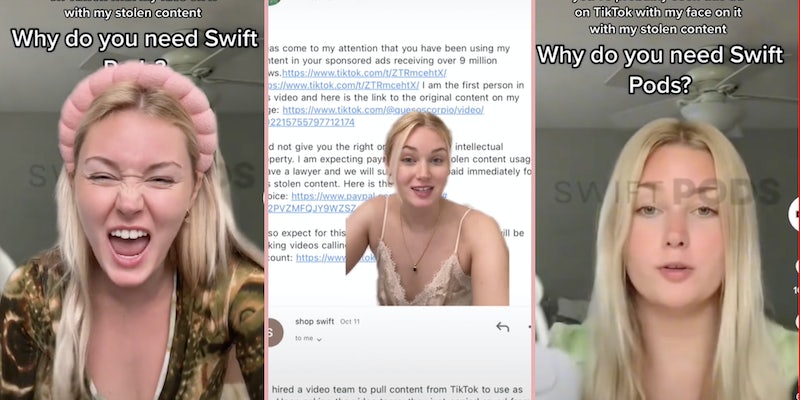 ‘They’re gonna be severely disappointed, and who are they gonna think of? Me’: Influencer says brand selling Airpods Max dupe, Swift Pods, stole her content for TikTok ad

'I am holding the real Airpod Max's in this video, and they're promoting this Airpod Max dupe that's $40.'

“The number of times I’ve seen this ad pop up on my For You page is so infuriating,” creator and social media coach Claire Wenrick (@claireliz) said in a video shared earlier this month.

On Oct. 7, she posted a TikTok calling out Swift Pods, a company purporting to sell a dupe of the Apple AirPods Max at a lower price point. A video she made previously was used in a Swift Pods ad without her consent and had been circulating on TikTok for the past two months.

On Thursday, she followed up and posted the emails she sent to Swift Pods, asking to be paid for being featured in the ad, which clocked more than 9 million views, as well as their confusing and dismissive reply. In one email, Swift Pods claims that the TikTok didn’t “organically” get that many views but was “botted to look engaging by a social media company,” which Wenrick says is not true.

Ironically, the headphones Wenrick is holding in the stolen clip are the AirPods Max.

As of Friday afternoon, the @swiftpods account has been deleted. In TikTok videos posted Friday, other customers claim the brand’s website now redirects to a go-kart shop.

There are plenty of other dissatisfied customers and warnings on TikTok, the main platform where Swift Pods advertises. Shipments have arrived without the cases or chargers that were advertised, and quite a few people say the brand blocked them for making negative comments or content about the product. Wenrick says Swift Pods blocked two of her accounts.

Wenrick tells the Daily Dot via email that Swift Pods made two new accounts, @swiftpodsco and @swiftpods.shop, and re-uploaded her video. Both are down as of Friday afternoon. She says they did not respond to a follow-up email and have not paid her invoice.

Unwitting creators being featured in ads is a major issue on TikTok, and often hits smaller creators. More recently Bethenny Frankel sued TikTok for using her likeness in ads, though she’s also taking aim at smaller accounts in the process.

The Daily Dot reached out to Swift Pods via email for comment.