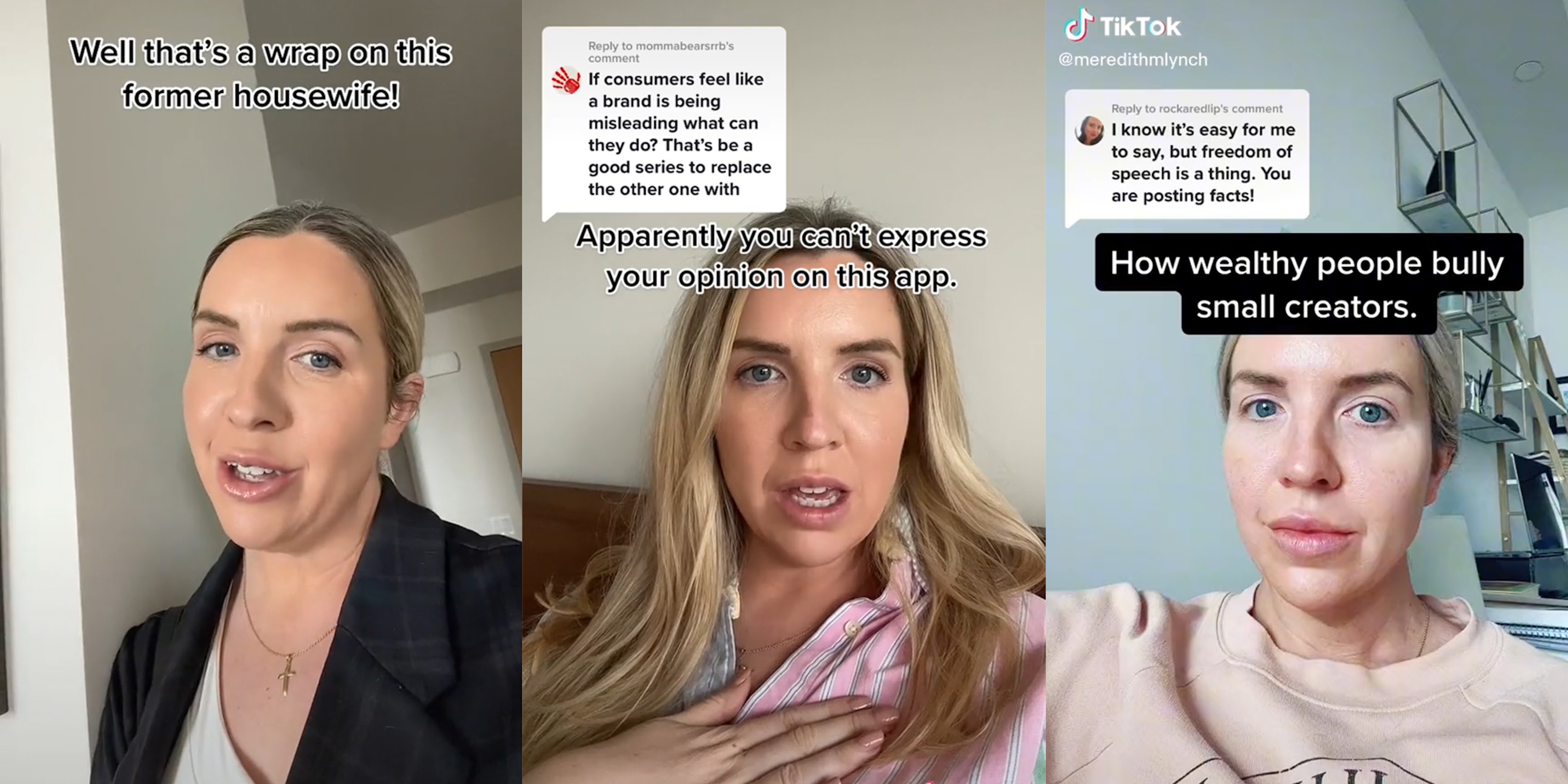 ‘Someone who has become famous for speaking her mind and giving her opinion is now shutting down influencers.’

In a multi-part viral TikTok series, pop culture creator Meredith Lynch claimed former Real Housewives star Bethenny Frankel sent her a cease and desist letter for “defamatory statements” after the creator spoke negatively about Frankel’s brands. In the midst of a lawsuit against TikTok for the use of Frankel’s image and likeness to promote counterfeit products on the platform, the video series sparked debate in multiple viral TikTok responses from influencers about celebrities being protective of their brands and the potential consequences for smaller creators.

Starting on Sunday, Lynch (@meredithmlynch) posted a series of videos, each attracting hundreds of thousands of views, accusing Frankel of “bullying” smaller creators to silence their negative opinions. The creator said she believed she upset Frankel after she showed in now-deleted TikTok videos that Frankel’s company publicly trademarked sayings like “it’s a scam” for merch, podcasting, and other entertainment products in December 2021. She said she noticed Frankel recently used the phrase more often in video reviews for various products and thinks Frankel pre-planned her use of the phrase far in advance for business purposes.

Lynch claimed the cease and desist letter she received demanded confidentiality and said the creator could not speak publicly about receiving the letter. Lynch asked lawyers on TikTok if she had to abide by that demand if she did not agree to enter into a confidential agreement. However, she also said she would be deleting some of her videos about Frankel in an attempt to avoid legal trouble.

“Yes, freedom of speech is a thing, but what really wealthy people can do is they can threaten your freedom of speech, and you don’t have the money to push back. … People are like, ‘Oh, but you could just, you know, go to court.’ Like, I would then have to get lawyers to back me up. … I think that this person bullies small creators into silencing them. … In my opinion, this app isn’t really built for big celebrities. … We’ve created this really cool community where people actually state their own personal opinions. … When they see small creators saying, ‘Hey, look, I found this,’ or ‘Hey, look, this happened,’ they freak out,” Lynch said in a video with over 199,000 views.

In a video response to the controversy on Wednesday, Frankel (@bethennyfrankel), who has over 3.8 million followers on TikTok and Instagram, confirmed she sent two creators cease and desist notices. She said one of the creators, hinted to be Lynch, misrepresented her non-profit BStrong and other business ventures, like her trademarks and makeup line.

“Talking about my trademarks, you can go look up my trademarks, they’re all there to see. But, I, there’s nothing to do with ‘scam’ and any new show or any new product or anything having anything to do with my reviews. I’ve been saying, ‘it’s a scam,’ for years. … There were things about my businesses and my charity that were incorrect. That is the reason for the cease and desist,” Frankel said in the video.

Frankel also said anyone can say what they want about her—unless they are spreading misinformation.

“It is a free country. Say inaccurate, false pieces of information about a relief effort that saves lives, and say something about my business that is inaccurate, and don’t understand how to read trademark documents, then you’re spreading false information, which now other people are spreading,” Frankel said in the video.

In the past, Lynch made many pop culture commentary videos about Frankel, criticizing her for various reasons and discussing her businesses and charity work.

In one video posted in September, Lynch criticized some of Frankel’s humanitarian work through disaster relief organization BStrong, saying the organization is not actually a non-profit. In the video, Lynch said she dove deeper into Frankel’s humanitarian work on her paywalled Patreon account. BStrong states on its website it is in partnership with the registered 501(c)(3) non-profit organization Global Empowerment Mission. BStrong also says 100% of donations go to disaster relief efforts with “no administrative or overhead expenses withdrawn.”

In September, Lynch also made a video vaguely discussing Frankel. Lynch said in the video she “almost lost [her] entire livelihood” for using the word “scam” when referring to celebrity business ventures. In another video, Lynch also said Frankel blocked her for saying Frankel misled followers about not having a background in makeup despite launching makeup products in the past.

The Frankel-Lynch controversy provoked a response from comedian Heather McDonald (@heathermcdonald), who spoke about the story initially in hypothetical language on her podcast. However, on Wednesday, McDonald posted a TikTok, which now has over 242,400 views, speaking openly about her thoughts on the situation.

In the video, McDonald said “her heart was broken” for Lynch. She said she initially did not use names when discussing the story on her podcast because she was afraid the smaller creator involved may get punished legally.

“I’m disgusted by this. I want everyone to know that Bethenny is the biggest hypocrite in Hollywood, and believe me, I’ve met a lot of them. … Someone who has become famous for speaking her mind and giving her opinion is now shutting down influencers,” McDonald said in her video.

TikTok users debated how Frankel was being protective of her image in multiple response videos and comments sections. Some users defended Frankel as a businesswoman fighting alleged misinformation about her work. Others criticized her for targeting smaller creators, saying they are not afforded the same protections as rich celebrities due to a lack of funds for legal proceedings.

The controversy comes off the heels of news breaking that Frankel is suing TikTok for not properly removing ads for counterfeit products using her image and likeness on the platform. The news sparked a larger debate around influencer copyright protections and social media regulation.

Alexandra Roberts, a professor of law and media at Northeastern University with expertise in influencer marketing, spoke with Passionfruit about the Frankel-Lynch controversy. Roberts said it is possible to defame someone on TikTok, even if one’s videos are not seen by many people or the account in question is private. Roberts said a defamatory statement typically is a “false statement of fact published to a third party that harms the reputation of the person or entity that is the subject of the statement.” For statements against public figures, that statement would need to be proven to be made with “actual malice.”

“In the case of a public fi​​gure like Bethenny, negligence is not enough: the person must have made the statement with knowledge that it was false or with reckless disregard for its truth or falsity. … Defamation law varies state to state, but in those states that have considered the issue, most have also applied the higher standard (requiring actual malice, not mere negligence) to product or business disparagement. In other words, it’s harder to win a defamation or disparagement suit when the victim is a famous person or a product than when they are a private figure,” Roberts said.

Roberts also wanted to clarify statements of opinion are not defamatory, even if they are negative. However, Roberts also said if Lynch said Frankel’s charity is not a non-profit when it is, that could be the basis for a legal course of action against Lynch.

“In fact, small businesses that receive [cease and desist letters] from trademark owners often share them on social media to rally support from customers, and large companies know to keep in mind that a bullying or overreaching [cease and desist letter] can prove embarrassing when it’s shared with the public,” Roberts said. “There’s one exception … Publishing a letter might constitute copyright infringement, depending on the fair use analysis. So while the existence of the [cease and desist] is not a secret, and a recipient can certainly talk about it and summarize its contents, reading it out loud in a video posted to social media or publishing it online is still risky—not because of the confidentiality demands included in the letter but simply because of copyright law.”

Roberts hinted Frankel might be on the receiving end of what lawyers call “the Streisand effect.” The effect was coined after famous singer Barbra Streisand attempted in 2003 to sue a photographer who took a photo of her cliffside house to demonstrate coastal erosion in California for violation of privacy. The lawsuit ended up drawing a large amount of unintended attention to the photograph.

“When someone sends a cease and desist letter, they risk what we call ‘the Streisand effect,’ which is when the [cease and desist] generates far more publicity than would otherwise exist around precisely the statement the sender doesn’t want the public to hear!” Roberts said.

Passionfruit reached out to Frankel, Lynch, and McDonald for comment via email.