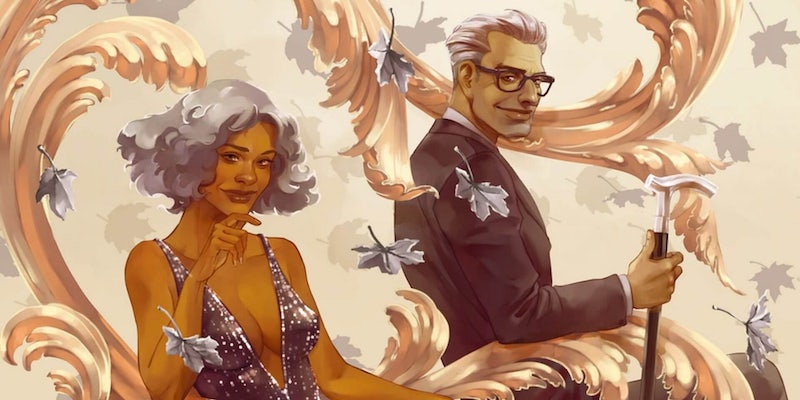 Smut Peddler began in the 2000s as an adult minicomics series by Saucy Goose Press. In 2012, comic artist C. Spike Trotman revived the project under her label Iron Circus to enormous fanfare. The series took off with new readers, thanks in no small part to its unapologetically queer, feminist, and sexually inclusive gaze. Nearly 10 years and four volumes later, that legacy continues with collections featuring everything from robots to monster boys.

Silver is no less popular. The latest edition earned over $65,000 since its Kickstarter campaign began on Sept. 16, with over 1,500 backers supporting the anthology. Within the campaign’s first hour alone, Iron Circus earned half of its $20,000 funding goal. Five hours later, the project was fully funded. Backers are still contributing $40,000 later and surpassing Iron Circus’ stretch goals, which directly benefit all of the collection’s contributors.

“Iron Circus was the first publisher to include Kickstarter-based bonuses as a part of their projects, and we’re continuing that tradition of rewarding our creators with this project,” Trotman wrote on the Kickstarter page. “This pre-order event will determine the bonuses of our authors. That bonus is a $5.00 page rate increase every $5,000 the Kickstarter makes over goal. That means the more work an artist has put in, the more they stand to make. This is on top of the page rates they’ve already earned, and there’s no cap on potential pay.”

Silver features 14 stories in total, most of which queer in nature: Four comics show stories between two women, including one with an explicitly trans character, while eight feature men attracted to other men, with one that also stars a trans person. The anthology has over 250 pages of comics in total, all in color. Featured artists include Del Borovic, Blue Delliquanti, Ziyed Yusuf Ayoub, Lyndsay McSeveney, and reapersun, among others.

Smut Peddler Presents: Silver launches in May 2020. Interested backers can spend $15 for a PDF copy, $30 for an additional physical version, and up to $185 for digital and physical versions of all five Smut Peddler releases. The pre-order campaign ends on Oct. 2 at 7pm ET, so interested fans have just over a week to lock in their Smut Peddler purchase for 2020.

The Daily Dot reached out to Iron Circus for comment.