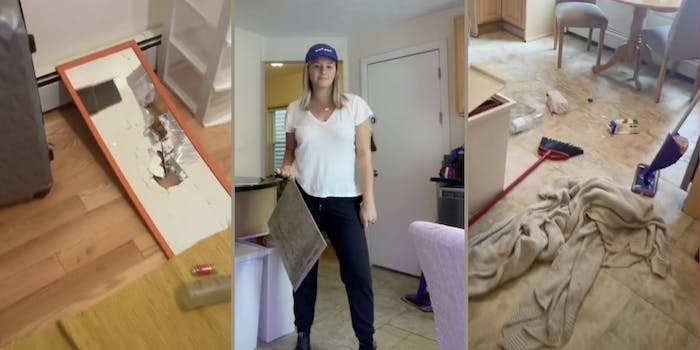 ‘He thought of so many ways to be destructive’: Man trashes TikToker’s house after getting rejected by her friend

'I spoke to him about consent... and then he became very upset'

A man trashed a woman’s house after being rejected, and videos of the aftermath are going viral on TikTok.

In a series of eight videos, Anna Martin (@annamartin35) shows her house completely ransacked and claims that a man went on a tirade trying to destroy her belongings after her friend rejected his advances.

In the first TikTok, posted Sunday, Martin says that the night before, her and her friend went to a bar and invited some people back to her house to “post-game.”

“One person was trying to make a move on my friend, she wasn’t interested and I spoke to him about consent, um, and then he became very upset and trashed the apartment,” she says.

“As you can see he, you know, smashed a bunch of our vases and things, smashed bottles, smashed mirrors, dumped contents of things onto the floor,” Martin says in the video. “You can see where the tile is messed up because he dumped milk all over the ground… he really messed everything up so, um, don’t invite strangers into your home, men are trash… we obviously called the police.”

In a later TikTok, Martin says she did contact the police and that they are opening a case, but does not want to get into further details. Martin appears to live in the Boston area.

More TikToks were posted to the account, many of which use current TikTok trends to show the women cleaning up their home, pulling tiles from the floor, and going into more detail about what was destroyed (he apparently put cream in their hydroponic garden).

She also answered comments such as: “Wait why did you invite a strange man in your house?”

While she explains that doing post-games is pretty normal in American culture, she also says she won’t be doing it again.

“I felt like it was fine and maybe that’s me being naive,” she says. “I wish that it was safe to do that without worrying that someone could become violent or trash your house… Comments like this aren’t helpful. What happened happened. It’s not going to happen again.”

User @kinggrundle wrote, “😂😂😂😂 Be honest, were you respectful or did you speak to him like a pos before he trashed your apartment?”

“This man was grabbing my friend who had rejected him multiple times,” she responds in another TikTok. “I do not owe him respect at that point. This is my home, and if he doesn’t understand consent, he is no longer welcome to hangout with us. And I am not going to calmly and quietly say, ‘please don’t grab my friend.’”

“If that’s how men respond to being told the truth by women, then that’s scary,” she concludes.

Another user asked how they didn’t notice the trashing was going on so they could stop it, so Martin explained the situation.

“We did notice. It didn’t feel safe to try to reason with an incredibly large man on a violent rampage,” she says.

Whenever he stopped trashing things, she says they kicked him and his friend out. She also says that if she had done something to try to intervene, people would be commenting about how that was unsafe and she should’ve left it to the police.

Besides the comments that Martin addressed in her response TikToks, many users were supportive of her and her friend and encouraged her to pursue a case against the man legally. They also dogged the man who destroyed her home.

“It’s laughable that men try to claim that women are too sensitive when they act this way when someone tells them no,” commented @anniekrasnow.

“It’s reasonable of you to expect casual encounters at bars to go well and to try and make new friends. You did nothing wrong,” wrote @notdoc_.

“File charges and get a protection order. Even if nothing happens, there needs to a record of this guys behavior for the future,” said @austinbirdy.

A lot of people also assumed it wasn’t the man’s first time being violent and destructive.

“He thought of so many ways to be destructive it can’t be a one time thing for him. Im so sorry, glad you’re both safe ❤️,” commented @lotusflwr.

The Daily Dot reached out to Martin via TikTok comment section and contacted the Boston Police Department but has not yet heard back.