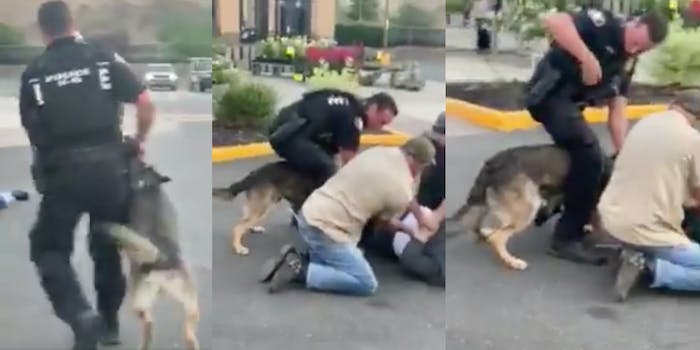 The man was already pinned down by three people when the officer dragged the K-9 out of the cruiser.

A cellphone video shot during the arrest of a 53-year-old man shows a Yakima police officer forcing a K-9 to bite the suspect while he’s pinned to the ground.

The video, shot by Noemi Sanchez, shows two civilians and a state trooper pinning Jose Zaragoza to the ground. Then, an officer gets his K-9 dog out of his car and forces it to bite Zaragoza in the leg.

“There was already a state patrolman on top of him, civilians on top of him, yet they chose to have the dog come out and bite him,” Sanchez, who posted the video to social media, said, per KOMONEWS.

According to state troopers, the incident started after they saw a truck swerving down a highway on Tuesday evening. Police pursued Zaragoza after he sped off.

Sanchez’s video shows Zaragoza exiting his car and taking off running. After a trooper tackles him, two bystanders join in to assist.

After Zaragoza allegedly began resisting arrest, the officer got his police dog out of the cruiser. A Yakima police official said Zaragoza’s refusal to comply warranted the use of the K-9.

“He was in control of the situation,” Yakima Police Department Lt. Chad Stephen told the Yakima Herald-Republic. “If he wasn’t doing anything wrong, why did he not stop for the police?”

Sanchez, who prefers to go by the pronouns they/them, said they were shopping and saw the police cars and commotion. Police were yelling commands at Zaragoza in English, but it was clear to them he only spoke Spanish.

“Any time he was given directions in English, he could not follow it, but when it was translated into Spanish he could,” Sanchez said.

Stephens said the incident will be reviewed, per YPD policy, by both the patrol division commander and the department’s police dog coordinator.

After getting treated for the dog bite, Zaragoza was booked on suspicion of evading police, resisting arrest, and DUI.