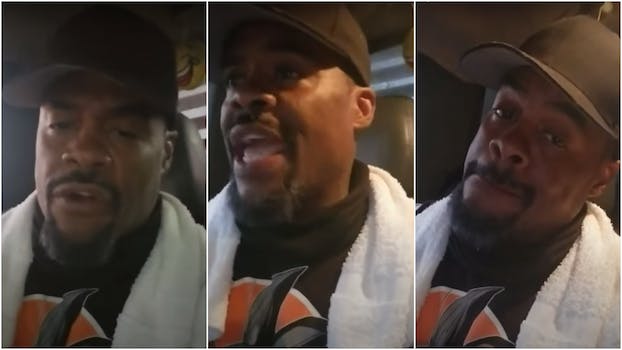 ‘I’m not going home dead’: Black cop makes video after getting pulled over by white cop

'It was very scary because now you got a wolf pulling over a wolf.'

A viral video from last month shows a Black police officer getting pulled over by a white police officer and giving advice to anybody who finds themselves in the same situation.

Michael Lawrence filmed the video on June 12, and the Viral World YouTube account uploaded it on June 15. A Redditor shared it on r/PublicFreakout on July 7, where it has received almost 63,000 upvotes. The YouTube video now has over 500,000 views.

Lawrence said he got pulled over in Prince Georges County, Maryland, for allegedly taking a non-direct route to get on the Capital Beltway.

“That was the most scary encounter ever,” Lawrence said. “You see how it feels when the sheep becomes the wolf. But it was very scary because now you got a wolf pulling over a wolf.”

Lawrence said the white officer’s “whole demeanor changed” when he confirmed that he had a knife and a gun in his car, despite being an officer himself and having the necessary paperwork to carry weapons. The white cop put his hand on his own gun and asked to see Lawrence’s credentials.

“Fuck no,” Lawrence said. “I’m not reaching into my pocket where my gun is, on my hip.”

Lawrence then demanded the white cop turn on his body cam.

“All police officers have a body cam they’re supposed to wear, it’s a little box,” Lawrence said. “If you don’t see that red light, don’t you do shit.”

Lawrence told the white cop where his knife, gun, and wallet were located in his car, but he refused to reach for them himself.

Lawrence said he then reached for his cell phone on his dashboard. He said people have a right to demand “a lieutenant or sergeant or somebody in charge” when an officer pulls them over.

“Grab your phone. When they pull you over, you dial 911,” Lawrence explained. “‘An officer’s pulling me over. I need your help. I feel scared. He is in uniform but I just don’t trust the situation.’ They will send them to you. They have to now.”

Lawrence admitted that even as a fellow police officer, the situation was terrifying. He said he empathized with other Black drivers who get pulled over by white cops and urged viewers to “please be safe.”

“Drive right, don’t give them no motherfucking reason,” Lawrence signed off. “I’m not going home dead.”