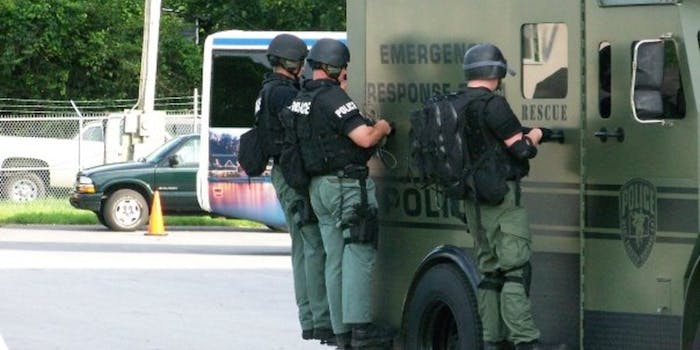 'He’ll just kill himself and get it over with.'

Police bodycam footage of a 2018 Pennsylvania incident was recently released, and it shows how some responding officers mocked a man on the verge of suicide.

Eyewitness News in Philadelphia, which obtained the footage, identified at least one of the officers in the video as Detective Andy Trautmann of the Chester County Regional Emergency Response Team.

On Christmas Day in 2018, Trautmann was among the officers called to the residence of Nathan Lewis in Chester County when he had reportedly locked himself inside, according to CBS Local in Philadelphia.

The footage shows the inside of an armored vehicle and begins with the sound of a few rounds of shots being fired.

Lewis’ wife had recently asked for a separation. After officers hear he is speaking to her on the phone, Trautmann says, “He’ll just kill himself and get it over with.”

“Tell him to just do it in front of the window,” says another officer, who has yet been identified.

“So we can confirm it,” adds another unidentified voice, per CBS Local.

Lewis’ mother told CBS Local that instead of helping him, the officers only “escalated the situation.”

“They did not give him help and they clearly did not have the agenda, to get help, or to de-escalate,” she said.

Following a nine-hour-long standoff, and after Lewis fired 20 shots at officers, the situation ended peacefully, according to CBS Local. The officers had to sing “White Christmas,” as requested by Lewis.

Lewis has been in jail since then on several attempted murder charges.

Lauren Wimmer, Lewis’ attorney, has called the officers’ actions “callous” and a sign of “lack of empathy.”

His family has called for Trautmann to be fired.

In a statement, Downingtown Police Chief Howard Holland tried to defend the officers, saying they were merely concerned about Lewis’ wife being “injected into discussions,” which could’ve “trigger(ed)” Lewis to harm himself.