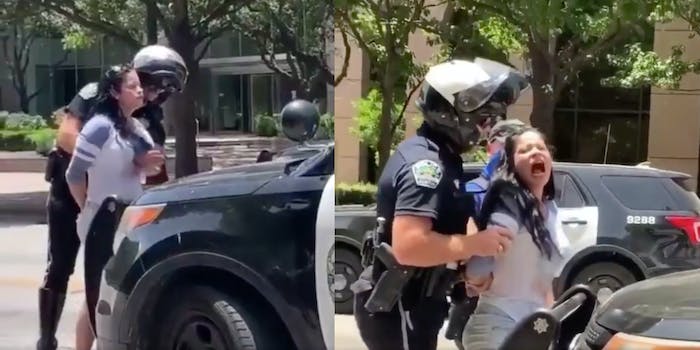 'Don't f*cking touch her like that,' a bystander screams at the officer.

A video of an Austin officer touching a detained woman’s breast is circulating on social media, and viewers are demanding answers from the Austin Police Department.

The video shows the detained woman with her hands behind her back stepping away from the officer when he touches her breast. The officer allegedly assaulted the woman twice in the video after she asked for a female officer to perform the search.

“Don’t f*cking touch her like that,” a bystander can be heard yelling in the background. “Get your f*cking hands off of her.”

Though officers are legally allowed to search people of any gender, many women request female officers for comfort and safety. It is unclear why a female officer was not available to perform the search.

It is unclear from the video whether the officer violated any code of conduct during the search. APD told MTO News it is “looking into the incident.”

Viewers are accusing the officer of sexual assault and demanding justice for the woman.

“She asked for a female officer, clearly stating she was uncomfortable with a man touching her breasts,” one Twitter user wrote. “She never consented to being touched in this way.”

Some are tagging Austin Mayor Steve Adler in tweets featuring the video.

“There is no reason for any male officer to have this authority over a woman’s body! In any circumstance!” one user tweeted.

However, some viewers pointed out that because women do not have a right to be searched by a female officer, this might not legally be considered assault.

APD will soon implement changes to encourage de-escalation. Austin City Council recently voted to reform the police department’s use-of-force policy. Officers are now banned from using force on people fleeing on foot or in a vehicle. The city council also voted unanimously to ban tear gas and reduce the police department’s military equipment “to the greatest extent possible,” according to MTO News.