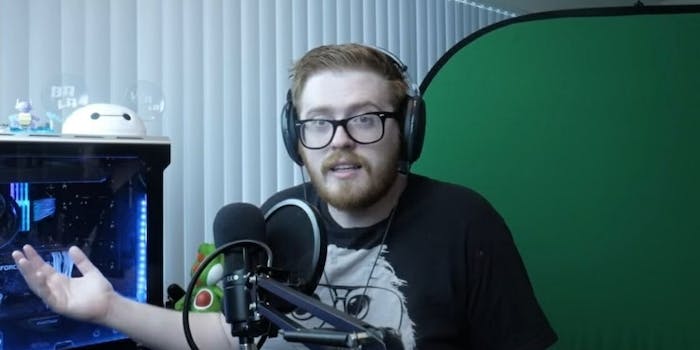 Beware of the dangerous transphobia behind this YouTuber’s ‘theybies’ rant

This screed is much darker than 'liberals have gone too far.'

This weekend, YouTuber PaymoneyWubby went viral for going on a rant about families raising their children gender-neutral. In his video, he used a two-month-old NBC feature to pontificate on the idea of “theybies,” which he said sounds like an STD.

“We tell young girls growing up to not get dirty and to not play like boys, and that causes issues down the line,” PaymoneyWubby said. “And we tell young boys growing up to not cry and not show emotions, to be a boy. Those are gender stereotypes, and those can cause issues down the line. I don’t see the connection between that and raising your children genderless. Your daughter can play in the mud, she can climb a tree, but that doesn’t make her not a girl. Your boy can cry but that doesn’t mean he doesn’t have a gender. The logic has never made sense.”

On the surface, this rant may seem like typical conservative griping about liberals gone-too-far. But underneath, it’s a dangerous attitude which vilifies parents who try to reject harmful gender expectations, and throws doubt on children’s ability to know themselves.

One parent PaymoneyWubby reacted to, Julia Sharpe, said of her genderless twins, “We definitely got more pushback from co-workers, who were like: ‘Wait, you’re not going to tell me what you’re having? You’re not going to tell me what your kids are?’ I’m like, ‘I’m telling you they’re children.’ But they got really, really frustrated that we wouldn’t tell them what their genitalia was, which is kind of a weird thing when you think about it.”

PaymoneyWubby—who is also a Twitch partner whose Twitter bio reads he “streams for children” and therefore perhaps makes him think he is an authority on his audience—claims that this anti-gender-neutral pushback is out of concern for the kids. It is here that his thinly veiled transphobia comes fully out from behind the covers. PaymoneyWubby argues that parents aren’t giving children a choice about their gender; they are pushing boys to identify as girls if they like wearing skirts. Essentially (although providing no evidence of this), PaymoneyWubby is claiming that children are not choosing to identify as a different gender than what they were assigned at birth, but are behaving in gender non-conforming ways, and are then having a different gender assigned to them, regardless of their wishes. Which is the opposite of what’s going on here. Parents are raising their children genderless so that the children can self-identify their gender when they’re old enough, which is the ultimate amount of choice a parent could grant to their child to prevent pain or gender dysphoria later in life.

The YouTuber continued to misrepresent and belittle the identities of transgender children after showing a montage of kids expressing themselves and fighting for their rights. “When you’re 9, if you want to say you want to be a girl, cool fucking ranch, kid,” he says. “When I was 9, I was Charizard. We fucking move on.” He then went on to talk about transitioning, saying, “Now, there are some people in this world who are much happier when they go through [hormone suppression and gender reassignment surgery]. But not kids, man. Kids are fucking stupid. You should never give a child the authority to make a decision that can last a lifetime when it comes to something like this.”

First of all, there is no evidence that the children in the story he is citing are being given hormone therapy treatment, nor are they going through gender confirming surgeries. Generally, the earliest medical intervention for transgender children is puberty blockers, the effects of which are reversed when a person stops taking them.

Secondly, it is incredibly dangerous to wholesale dismiss children’s self-identification and feelings. Yes, children don’t understand a lot of things, like why they need to eat their vegetables, or put on mittens. But children can identify when something feels bad or wrong, like a pronoun or name that doesn’t fit them, and parents need to listen to those feelings. Even if a parent is afraid that a child may not be able to self-determine their gender yet, there is no harm in letting them explore reversible changes to their appearance, behavior, or name, in order to find the source of that pain.

Simply put, transgender children, or “theybies,” aren’t being given the authority to make medical decisions that last a lifetime. They are being given a chance to discover who they outside of the expectations of gender. Despite Paymoney Wubby’s claims, what he is advocating against is choice and bodily autonomy.