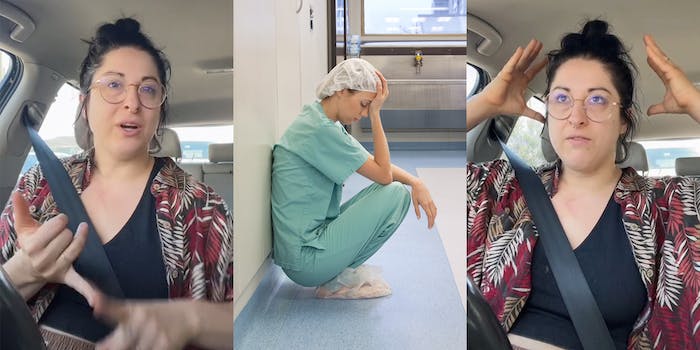 ‘I am not ready to be a labor and delivery nurse’: Nurse goes viral for video on ‘a world post-Roe v. Wade’

'I was leaning the other way, but you’ve changed my mind.'

A labor and delivery nurse went viral on TikTok after sharing concerns for patients seeking medical abortions given the reversal of the constitutional right to abortion on Friday.

Jillian Phillips (@jillian_rn4) posted a video Saturday, reacting to the news of the Supreme Court’s decision to overturn Roe v. Wade in the case of Dobbs v. Jackson Women’s Health Organization, which took away the constitutional right for pregnant individuals to choose to have an abortion.

“I am not ready to be a labor and delivery nurse in a world post Roe v. Wade,” Phillips says in a video of herself sitting in her car after working a night shift.

Her video has been viewed more than 5 million times by Monday.

Phillips says in the video that upon hearing the news of the Supreme Court’s decision, her first concern was with those who may need medical abortions to save the mother’s life or simply to “reduce an unimaginable amount of suffering” in the case of nonviable pregnancies.

As a labor and delivery nurse, Phillips says in the video she has participated in many medical abortion procedures throughout her career.

“I can’t help but think of the women who are gonna be forced to carry their baby who is nonviable with life all the way to term just to deliver a baby and watch it die,” Phillips says.

She also mentions anencephaly, a birth defect in which babies are born “without parts of the brain or skull,” according to the Centers for Disease Control and Prevention (CDC). While babies with the condition may be carried to term, the CDC stated on its website, “almost all babies born with anencephaly will die shortly after birth.”

Phillips encourages viewers to imagine the emotional burden of carrying a nonviable pregnancy to term, which can reportedly now be legally forced in several states with the Supreme Court’s decision. Most states with immediate abortion bans or trigger laws make exceptions only in instances where the pregnant individual’s life is threatened.

“The loss of a baby at any gestational period is a horrible thing that no one should have to deal with,” Phillips says. “But imagine having to field all of those questions for the extent of your pregnancy with the knowledge that you have knowing that your baby will not survive.”

In response to a comment saying, “Do you read?? The medical abortions are still allowed. They are the exception. As a professional, you [should] read before you start spreading lies,” Phillips posted a follow-up video clarifying her points.

Acknowledging the current legal right to abortion in all states when a mother’s life is in danger, Phillips says her initial video is about fetuses diagnosed with syndromes that are incompatible with life or that severely impact quality of life. Since such conditions do not explicitly put a woman’s life in danger, terminating these pregnancies will now be illegal in many states.

“Yes, there are some women who choose to carry their pregnancy to full term in order to meet their baby who may only live a couple of minutes, but that is their choice,” Phillips says. “And other people should be able to choose differently.”

Many viewers shared their own experiences in the comments section, echoing Phillips’ sentiment.

“This is SO much deeper than ‘I accidentally got pregnant and don’t want a baby’ that people don’t realise,” one user wrote.

Some said Phillips’ video changed their stance on the issue.

“I was leaning the other way, but you’ve changed my mind. Thanks for opening my eyes. I never thought about it from this perspective,” one commenter said.

In an email interview with the Daily Dot, Phillips said she decided to share a video about the verdict in order to shed light on the perspective of healthcare providers.

“Those privileged enough to have their blinders on about reproductive health don’t see what healthcare providers see everyday,” Phillips said.

Phillips, who has been a labor and delivery nurse for eight years, currently works as a travel nurse in Virginia. She said she has experienced many patients who sought abortions due to conditions that make their pregnancy incompatible with life, including anencephaly and several other genetic deformities.

In response to the traction her video has gained, Phillips said she is “grateful” for those who said she has swayed their opinion on the matter but that she is also “heartbroken and touched” by commenters who have shared their own experiences with at-risk pregnancies.

“I want people to realize that saying ‘just go to another state if you want an abortion’ comes from an unbelievable place of privilege and naivety,” Phillips said.