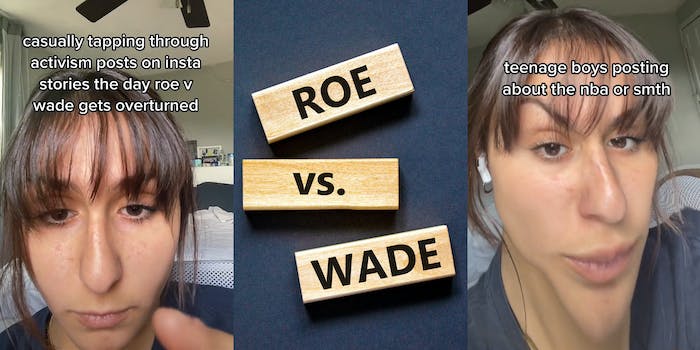 After Roe v. Wade was overturned by the Supreme Court in its decision on Dobbs v. Jackson Women’s Health Organization, a TikToker says that her Instagram timeline is filled with “activism” posts about the decision. Commenters on her video discussed the usefulness of posting and reposting on Instagram about abortion rights.

“Casually tapping through activism posts on Insta stories the day Roe v Wade get overturned,” @startyoursinjins wrote in a TikTok posted on Friday. The TikTok had been viewed over 130,000 within the first five hours of it being posted.

Commenters on @startyoursinjins’ videos discussed slacktivism, which is showing one’s support for a cause or issue online without engaging in other forms of activism.

“Maybe because posting on Instagram isn’t gonna do anything,” @gavinarpaia wrote.

In a follow-up video, the TikToker said that she agrees that posting on Instagram and social media about abortion rights can be performative, but that doing so is also a good way to share resources.

“Social media activism isn’t everything and I definitely do agree that there’s a lot that people can be doing to get informed,” @startyoursinjins says. “There are a lot of resources out there to help. And I think that Instagram is one resource.”

@startyoursinjins also says that there is “a lot more” people can do than just post.

The Daily Dot has reached out to @startyoursinjins via TikTok comment.