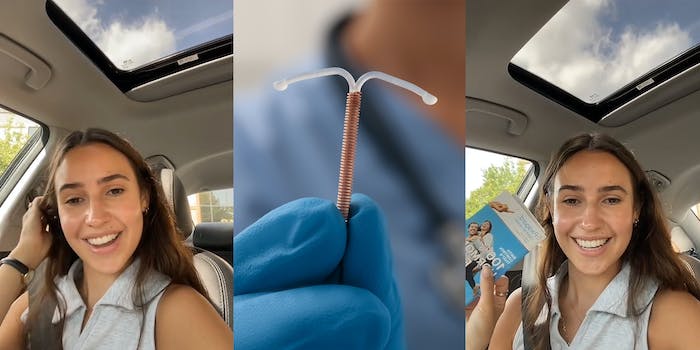 ‘Got the death sentence today’: Woman says her gynecologist wouldn’t allow her to get sterilized, suggested IUD instead

A woman on TikTok went viral this week after alleging her gynecologist refused to consider her request for tubal ligation, a form of sterilization also known as “getting your tubes tied,” instead suggesting she consider getting an IUD.

TikToker Olivia (@lvdwns) posted her video on the topic two days ago, in which she reenacts an interaction she allegedly had with her gynecologist. The video currently has over 1.5 million views.

“Hi, Mrs. Gynecologist! My name is Olivia. I never want children. I’ve had this made up in my mind since I was old enough to think of the concept. Can I please have my tubes tied?” she starts in her video.

“Well, no. You might meet Mr. Right and change your mind,” the gynecologist character says.

In comments, users pointed out the hypocrisy of giving this advice for not wanting children, yet not offering the same advice to those who want kids.

“We don’t tell people who WANT kids that they’ll change their mind?? So why is it okay for them to tell us we’ll change our mind???” one user asked.

“Seriously. Like I don’t care if other people have kids I just don’t want one for myself,” Olivia responded. In other comments, she added, “If I change my mind I’ll adopt,” and “There are so many kids sitting in our shitty foster system waiting to be adopted.”

In follow-up videos, Olivia further elaborates on her position.

In this video, she says she is not considering an IUD or other forms of hormonal birth control. However, she says this is not relevant at this point in her life.

“I just kind of went in for a check up and asked because, like, you know, I just don’t want kids!” she says. “On a serious note, I guess we’ll just cross that bridge when we get there. Whatever boo I end up with, I guess he’ll just have to get a vasectomy. Apparently you can get one with the snap of a finger because they’re ‘reversible.’”

In another video, she also chastised the men commenting under her videos about her decision, arguing that they had no right to make value judgments about her personal decision.

“I don’t go to the grocery store clerk to do my taxes — and I’m not going to ask a man what I should do with my fallopian tubes,” she concludes.

Update 12:09pm CT, June 19: In an Instagram direct message to the Daily Dot, Olivia offered her further thoughts on the reaction to her videos.

“I’ve learned that a significant amount of women have been in the same position being denied tubal litigation and similar procedures,” she tells Daily Dot. “I’m only 22, unmarried with no children so I wasn’t surprised by my doctor’s response, however a lot of women with several children already are being denied the procedure on the basis that they might want more, or perhaps that they might remarry and their next husband may want a child of his own. I find that reasoning so ridiculous! A woman shouldn’t be denied care based on her own decision about her own body in the case of a hypothetical divorce/man. I’m frustrated in my own case, but I can’t imagine these women’s frustration and pain.”

She also says she received a lot of support from other women who share her lack of desire for children.

“A lot of women were commenting their relief to see someone else with the same ‘child free’ mindset,” she continued. “I guess in the past it’s been pretty taboo for a woman to not want children, never mind be vocal about it, so I’m glad to be a voice for all of the women who feel isolated in that belief. I think now that social norms are changing its easier to talk about things like this, although there still is a lot of pushback.”

Not all of the response has been positive, however.

“Most of the negative comments have been from men. They think it’s a woman’s purpose to procreate and are angry that so many women are going against that outdated narrative,” Olivia details. “I think if men had to go through pregnancy and the qualms that come with it, their minds would definitely change! I don’t mind the hate comments though because it just opens up more room for discussion and educating people on the issue, plus the discourse keeps the algorithm pushing the video out to more people.”

Olivia said she urges doctors to listen to women and what they want for their own bodies, as some women often feel dismissed by their healthcare providers.

“Overall it’s been made clear that most doctors don’t leave room for discussion, and even when they do most women are met with a negative response straight off the bat,” she added. “I think we need to listen to women and their wishes more, and realize that each case has a bit of nuance rather than just denying everyone care across the board.”

The creator also considered the current state of reproductive rights, arguing that doctors limiting the options to prevent unwanted pregnancy contributes to the issue.

“It’s also hypocritical because our Supreme Court is working to undermine abortion rights, while simultaneously our doctors are creating more obstacles when it comes to unwanted pregnancies,” Olivia concluded. “I saw so many comments about people getting pregnant with IUDs and other forms of birth control after they had asked for sterilization procedures and been denied.”

“I think it’s important to look at the large number of children up for adoption and in foster care in this country, and then look at all the issues when it comes to reproductive rights in our country,” she said. “This issue goes deeper than women just wanting a ‘child free’ lifestyle, it relates directly to systemic issues in our healthcare system and legislature.”