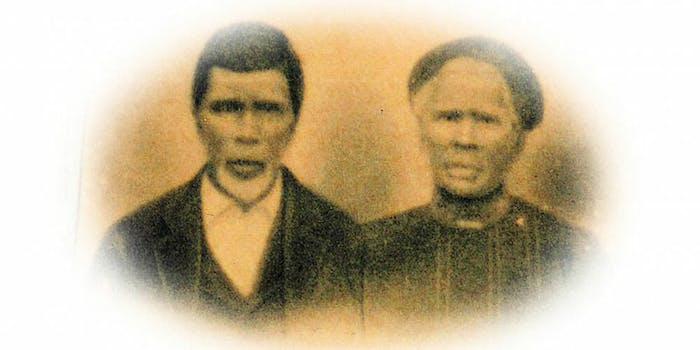 Family Archives of the Spencers of Screven County, Georgia

'Too many people want to forget it ever happened, but we can’t and shouldn’t.'

A Twitter thread prompted by a Minnesota woman stands as a stark reminder that Black Americans are still only a few generations removed from slavery.

On Saturday, Jocelyn Mammen shared how, growing up, she lived with her great grandmother whose parents were born slaves. “It wasn’t that long ago,” she wrote.

How many generations are you removed from slavery?

I lived in a house with my grandparents and great grandmother who was born in 1906. She was the baby of 8 and her parents were born slaves.

It wasn’t that long ago.

Her tweet soon prompted hundreds to share how easy it was to trace slavery in their own families. Many had grandparents or great-grandparents whose parents were slaves or were directly impacted by slavery by becoming sharecroppers.

“Even after emancipation, some were forced into becoming sharecroppers, which was just another form of slavery,” Mammen, who identifies as a disabled stay-at-home mom, told the Daily Dot in an email. “Then this country moved into the Jim Crow era…and in many ways, I’m not so sure that ended. The remnants of slavery are still very much with us.”

I’m 5 generations removed from slavery on one side and owing to some late life births only 4 gens removed on the other side. Both parents went to Jim Crow schools, father only finished 3rd grade. I’m 49. https://t.co/xsevF8z3AI

My great grandpa is 101, a few months ago I went to sit and talk with him. I finally decided to ask and he told me that his parents were indeed slaves pic.twitter.com/8O8db2ita5

That there are people alive who can talk about their close proximity to slavery is a testament to how recent it is in our history. Yet, these reminders need to be shared and re-shared because accounts of slavery continue to be disputed, or whitewashed, or even re-enforced in present day through institutional racism.

“I’ve noticed, particularly on Twitter, many people mainly on the right politically being dismissive of Black history, culture, and contributions. We still hear ‘Get over it, slavery was so long ago,’ but it wasn’t,” she says.

5 generations from enslavement. My grandmother was older than I am now when she was finally able to vote. My mother was an adult when Jim Crow was formally dismantled. I’m 46 years old. It’s all very recent. https://t.co/P4JuQk1WH0

My grandmother told me the story of her own grandmother coming to the Caribbean as a babe in arms- and as a slave.

I remember visiting my great grandmother Mamie & going on bus rides with her when I was little. She was born in 1890. Her father was born a slave. And she told me her grandmother was a cook on a plantation in Louisiana. Just 4 generations back to slavery. Really not that long ago

It eventually inspired the hashtag #NotThatLongAgo, which many used to share their accounts:

My great grandfather was a slave. He heard the first shots of the Civil War in SC. His first family were attacked & wife killed by the KKK in VA. He taught theology classes at Yale. My parents are in 70s. I’m only three generations removed from slavery. #notthatlongago

This is my maternal great-great grandmother, Claudia. Born a few years after emancipation, her early years were in captivity. There are plenty of other stories to be told in her lineage of labor & enclosure. It's not far, at all. pic.twitter.com/CQ7GqOUCRJ

These are my maternal great-great-grandparents. They were born in the 1840s. They were enslaved. pic.twitter.com/ETbXyGkqUO

My great grand parents were slaves. (My maternal side) He then bought some land from one of the cruelest families in Mississippi that my relatives still own until this day.

Mammen says she is pleased that her thread has “prompted a number of people to start researching their family genealogy and, better still, have these conversations with older family members now, while we still can.”

It has also been a lesson for non-Black people, which is especially important in an education system that repeatedly sees numerous accounts of both teachers and students spewing racist slurs or enforcing practices that are insensitive and contribute to the erasure of slavery narratives.

This thread is powerful. I am a white woman (well mostly…my great, great grandmother was full Cherokee but everybody else was European). I am a high school English teacher who is constantly trying to get my students to understand just how recent these brutalities occurred.

As a white southerner, I think about this often: Many people now in their 80s spent their childhoods in the care of elderly relatives who were children during the civil war. Some people in elected office today were *directly* influenced by people who thought slavery was “normal.”

The thread even prompted some descendants of slave owners to acknowledge their family’s past:

I am sad to say some of my generation were slave owners in pre-Civil War South Carolina.

Whew Jesus. My paternal family name is Thompson & they're from Culpepper. pic.twitter.com/ASjalDeDqq

“Too many people want to forget it ever happened, but we can’t and shouldn’t,” Mammen says. “It’s important to call it what it was, to look at who was hurt by it and who benefited. Most of the people responding are three to five generations removed from slavery. Look how far we’ve come…and just how far we have to go.”