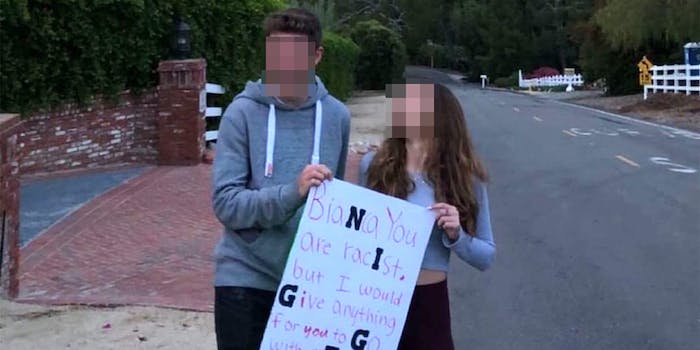 Promposal season is upon us. Which means it’s time to prepare for some deeply problematic viral moments.

On Tuesday, a student at Palos Verdes High School in California shared an image of a white couple gleefully holding a promposal banner that read: “BiaNa You are racIst. but I would Give anything for you to Go with mE to PRom.” The capital letters inside the statement spell out the N-word.

These two individuals attend my school and thought this was an appropriate promposal. I’m calling on my school to take action against this vile display of racism. @PVHS_Seakings @PVHSTyner pic.twitter.com/7mc0Y4V0V5

Ryan Pascal, who tweeted out the original image, also wrote a letter to the school’s faculty and staff, according to a follow-up tweet. “In today’s climate, No one is safe in an environment where racism is tolerated and joked about,” Pascal wrote. “That there are students on campus who do not recognize the blatant disrespect the words they used hold is a testament to the lack of effort we as a society put into expunging atrocities like these.”

According to Pascal, the school principal, Allan Tyner, issued a statement to parents calling the N-word a “slang term” and said the sign was “unacceptable.” Tyner said the two students involved and their families have been notified and there might be “severe consequences.” Tyner later apologized for calling the N-word “slang” and acknowledged it was racist.

This email was sent this morning where he appropriately calls the word a racial slur. pic.twitter.com/pqN422RB9r

Palos Verdes Estates Police Department said in a statement on Wednesday that they have looked into the matter and decided it “did not appear to be a credible threat” but it was “was meant as a [sic] (inappropriate) joke.”

Though treating this kind of rhetoric lightly sends a dangerous message, Pascal says that she hopes the two students, whose names she refused to reveal, will grow and learn. “We all deserve a second chance, and that starts with learning from our mistakes,” she wrote.

This isn’t even the first racist promposal of the season. A high-school student in Ohio was banned from prom after using cotton-picking—aka explicit references to slavery—in his promposal in February, and a student in Texas sent an almost verbatim promposal on Snapchat in April.