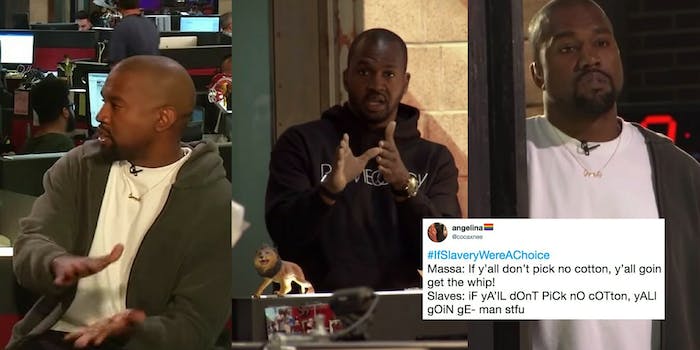 #IfSlaveryWasAChoice shows Kanye West just how wrong he is

“Once again, I am being attacked for presenting new ideas,” Kanye West tweeted on Tuesday evening. It’s just one of the latest tweets penned by the rapper and fashion mogul since he’s announced his status as a “free thinker,” offending thousands daily with each message connecting himself to far-right pundits and President Donald Trump.

Except, this time, it would appear that West is failing to bounce back from this latest round of criticism—and with good reason. By “new ideas,” West was referring to his assertion on TMZ hours earlier that 400 years of slavery was “a choice.” And by “being attacked,” West was referring to Twitter’s mocking reaction, showing him what life would have really been like for enslaved Africans had slavery been a choice.

Using the hashtags #IfSlaveryWasAChoice and #IfSlaveryWereAChoice, Twitter users punched up at West’s backasswards thoughts on slavery and carved out space online to really deconstruct what having “choice” in an “employment situation” looks like.

Some tweeted about just being able to, you know, leave enslavement.

Others tweeted about being able to excel within slavery as an industry, going to college, and being assigned to working in the house versus the fields, or “embezzling” cotton to make into “a brunch fit.”

When you a freshman at Slave University and you get assigned to the house #IfSlaveryWasAChoice pic.twitter.com/nACNQdW4e6

When I embezzled a bunch of cotton that my fellow slaves picked and made a brunch fit. #IfSlaveryWasAChoice pic.twitter.com/9Mu7BbYTIP

#IfSlaveryWasAChoice
when you thought you and the squad got split up but you see them on the slave ship pic.twitter.com/D3BxcfXVIs

When you can't make it to Massa's class #IfSlaveryWasAChoice pic.twitter.com/7UwL9CPw91

And some discussed the “work culture,” like being able to “set up playlists,” “file intellectual property lawsuits,” and “not wanting to put in effort at the end of a shift.” You know, things that people with jobs they’ve chosen to do sometimes get to do, but definitely not enslaved people.

Me rereading the fine print on the slave contract after getting a check for $ 0.00#IfSlaveryWasAChoice pic.twitter.com/SiC8fscOLE

When massa tells a boring story and you have to act interested, otherwise you gettin hanged. pic.twitter.com/WwnhOzak0L

When you see a row of unpicked cotton but yo shift almost over #IfSlaveryWasAChoice pic.twitter.com/rjJ0YQJdpN

Setting up the work playlist for the day #IfSlaveryWasAChoice pic.twitter.com/Tp8vEfvlCz

Some tweeted about joining Harriet Tubman on the Underground Railroad, referencing history that might do West some good to get reacquainted with.

Harriet Tubman: I’m out side hurry up before I leave yo ass

When Massa catch me going to Harriet’s kickback after I called in sick for my field shift earlier. #IfSlaveryWasAChoice pic.twitter.com/WKs6IaONhk

Harriet: Get in loser we’re going to the Underground Railroad

Me when i missed Harriet Tubman’s “you up” text #IfSlaveryWasAChoice pic.twitter.com/1J3IRS4VeY

Harriet: I’m about to get up out of here, y’all coming?

When masa tries to send you back to the field but Harriet shows up #IfSlaveryWasAChoice pic.twitter.com/W8YwKThDfW

Some tweeted about what it would look like to stand up to their slave owner, using some of the internet’s most beloved memes and vines to show that, if slavery had been a choice, they wouldn’t have taken such abuse. But, again, people did not choose to become and remain enslaved, and avoiding such abuse was also not an option.

Massa: You coming in today?

Massa: "DID I JUST SEE YOU TAKIN A BREAK? WHERE'S MY GUN?"

Overall, the hashtags turned an outright false and insulting statement into a moment of satire and wit, once again showing West that he should probably reconsider his position on team “Never read books.” Because, even though West later tweeted that he “knows” that slavery wasn’t a “choice,” the next time he goes off perpetuating some other racist, misinformed understanding of institutional oppression, his critics might not respond as gently as laughing him off with vines and memes.