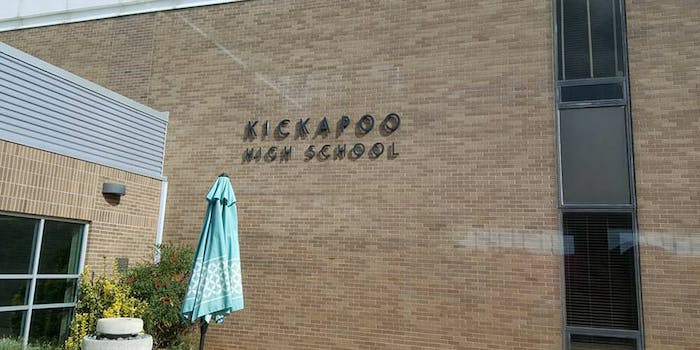 The school was recently in the news for another hateful act.

Police are investigating a student at a Missouri high school after a video showed him going on a racist tirade, including threatening to lynch students of color.

“This is for all the c**ns, sp*cs, and n******,” says the Kickapoo High School student, who is white, in the video posted on Thursday. “You stay the fuck out of our locker room. Fucking coming and stealing shit. We should fucking lynch you.”

“Fuck all of you!” he continues in the 20-second long video. “It’s a privilege to be in our school. You fuckers going around like you own the place. Fuck all of you. Every single one of you stupid cunts!”

One person who posted the video, @TheVikChick, tagged the Springfield Police Department in her tweet, saying, “the police do not think threatening LYNCHING to the Black & LGBTQIA teens in High School is a POLICE MATTER!!! In response on Thursday, the SPD wrote, “The language used in this video is vile and we DO NOT condone racism or violence. SPS has disciplined this student and we will do everything we can to make sure our community is safe.”

On Monday, the Springfield PD officially announced it was investigating.

Last Thursday, May 9, a shocking video surfaced of a Kickapoo High School student making racist and vile comments on social media. It was immediately reported to school authorities, including the Springfield Public Schools Police. (1/3)

While the student’s use of racial slurs against Black and Hispanic students are grave, many were worried about the explicit threat to lynching, which is recognized as a “bias-motivated act of terror” after a bill was passed last year making lynching a federal crime.

Did you hear that? He made a threat! Wow!

Threatening behavior needs to be addressed appropriately. Get this kid some help!

This is absolutely abhorrent! What happens if he does kill a black student? Oh yeah, y'all take them to @BurgerKing when they murder black people!

Last month, students at the school made news after displaying the Confederate flag in a counter-protest to the school observing a national Day of Silence, marked to raise awareness about LGBTQ students facing bullying and harassment. In the build-up to the event, two posters designed by the school’s Gay Straight Trans Alliance were ripped off.