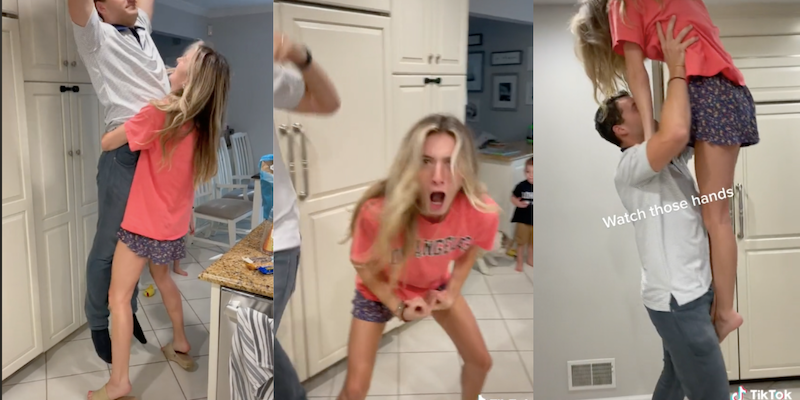 Both the wife and the nanny denied that the nanny is getting groomed after speculation.

A TikTok video of a father and his family’s 23-year-old nanny reenacting a scene from Dirty Dancing has gone viral and sparked concern from those who viewed it.

The nanny, Lizzie Norton, was recorded by the mother of the children she cares for dancing with the father, Andrew. They were attempting to reenact the famous lift scene from the 1987 film.

In the TikTok video, which was posted on Aug. 3, Norton and Andrew are filmed trying—but failing—to lift each other up. Andrew’s wife, Rachel, can be heard laughing in the background.

“You thumbed her boobs,” Rachel says as Norton yells out: “Oh my god, I’ve never done that before.”

The video garnered over 8.6 million views on Rachel’s TikTok account, which has over 110,000 followers and documents life with her husband, two children, and nanny.

The comments section of the video is filled with people calling the behavior was “unprofessional” and alleging that Andrew might be “grooming” Norton due to the difference in their ages and their uneven power dynamics.

“I was a nanny for 6 years for the same family and I NEVER EVER did 5% of what’s happening in this video,” one TikToker claimed, “So unprofessional.”

Another person wrote a comment in defense of the family saying, “Y’all will trust a nanny with your children’s life but this is too far? I don’t want a nanny that can’t be like family.”

Rachel responded to the comment, thankfully and wrote, “Thank youuuuu. My kids would never know she gets paid to watch them. They think she’s just family because we have such a good relationship. It’s great.”

Rachel also alluded to speculation that the two were engaged in an inappropriate relationship in a comment to critics, saying: “We’re flattered by the interest guys. Most of you are out of your minds but we’re flattered.”

Insider reported that in a second video that that has since been made private, Rachel said that Andrew and Norton spent a lot of time together during the pandemic, but ever since he returned to his workplace, they have seen less of each other.

She said in the video, “On the rare occasion, she does see him. They’re so happy to see each other because she’s like our little sister.” Rachel reportedly added, “We love her to death. She’s really, like, goofy and weird, and we can joke around and mess with her, and vice versa.”

She said the couple is even involved in Norton’s personal life. “When she dates and makes bad decisions on other things, we give her advice. We tell her we’re disappointed in her. We tell her we’re proud of her,” Rachel explained.

Rachel reportedly also denied the allegation made by viewers that Norton is being groomed. Norton then joined in to clarify that she is not being groomed and that “everybody can really calm down.”