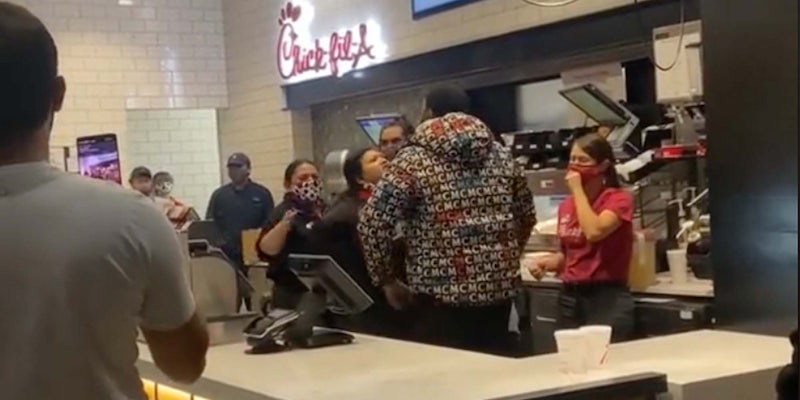 ‘No one gets paid enough for this sh*t’: Viral TikTok shows ‘male Karen’ screaming at Chick-fil-A workers behind the counter

'I love seeing fast food workers stick up for themselves.'

In a viral TikTok posted on Dec. 3, a man yells at Chick-fil-A employees from behind the restaurant’s counter.

“Give me my fucking food,” he yells. Employees yell back at him, and one is held back by her co-workers.

“No one gets paid enough for this shit,” Caley (@notcaleyy), who posted the TikTok, wrote in its caption. She also commented on the video saying it was taken in Century City Mall in California.

The video has been viewed over 2.4 million times since being posted over the weekend. Commenters were glad to see the Chick-fil-A employees fighting back.

“Once a customer goes behind the counter,” @jmoneyyyy97 wrote, “as an employee you have every right to swing.”

“I love seeing fast food workers stick up for themselves,” @clayy.edward commented.

The Daily Dot has reached out to @notcaleyy and Chick-fil-A.