6 of the safest spaces for LGBT youth to hang online

More than 60 percent of LGBT youth use the Internet to connect with each other, according to a 2013 study by the Gay, Lesbian & Straight Education Network (GLSEN). In addition, LGBT youth said that their online friends were more supportive than those they knew in real life. For LGBT young people, the Internet plays a large role in their ability to feel comfortable exploring their identity and finding others to openly talk to.

“A lot of young people are so excited to connect with each other about things that oftentimes in the real world can feel really isolating,” says Amit Routh, a senior manager with the Trevor Project.

But the Internet isn’t always a safe haven for the LGBT community, especially for those underage. However, by knowing where to find safe spaces, LGBT youth can curate a vibrant online community of support, and be seen and heard for who they are.

With this in mind, here are six online spaces that real LGBT young people have cited as the safest places to hang out.

Tumblr has long received wide acclaim from young people looking for LGBT-friendly spaces online. “There are blogs created specifically for LGBT reasons, and all the owners of those blogs tend to be really good with advice,” says a Gay-Straight Alliance (GSA) student from Clinton Rosette Middle School in DeKalb, Illinois. “On Tumblr, you can ask questions anonymously if you want, which I think is really important.”

“I’ve been on [Tumblr] for a few years, and I think it was the single most important thing in allowing me to accept myself,” says Selma, a high school student in DuPage County, Illinois. “Seeing other LGBT teens who were actually happy with themselves and their identity caused to me realize that I could actually do [the same]. It was also on Tumblr that I first came across terms like ‘bisexual’ and ‘non-binary,’ which was fundamental in shaping my identity.”

The trick to Tumblr lies in following LGBT-positive blogs. This can be accomplished by searching “LGBTQ” in the tags, which yields LGBT YA reviews or pro-equality political blog, All Out. Most LGBT publications and organizations also have Tumblr pages, such as the The Advocate, Autostraddle, GLAAD, GLSEN, and the Trevor Project. And for those involved in the social media following around TV shows, books, and movies, finding fans of the same characters or couples, such as Amy and Karma on Faking It, can lead to meaningful Tumblr friendships and communities. 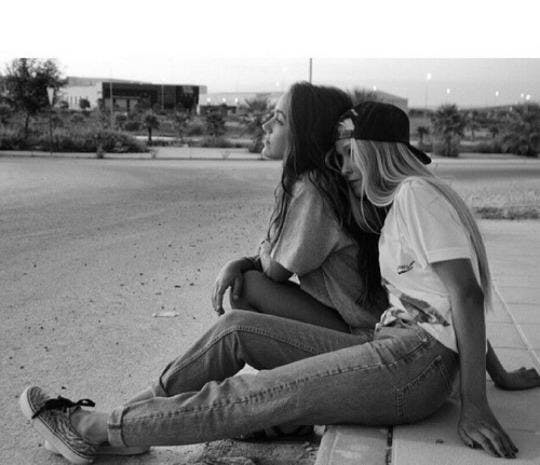 With Facebook and other large social media sites, GSA students at Douglas County High School in Castle Rock, Colorado, say, “There are no safe spaces online unless they restrict access to their friends only.” Facebook’s group privacy controls allow moderators and users to do just that by creating closed, private, or secret groups. “There are tens of millions of active groups on Facebook,” says a Facebook spokesperson. “People in the LGBT community frequently tell us the closed, safe space of Facebook groups helps them feel more connected to others.”

Wattpad, a social publishing platform where users share their written stories and fanfiction, allows LGBT people to connect through writing. “Wattpad is one of my favorite safe spaces, because you can post any kind of story or even share your problems through stories in a creative way,” says another Clinton Rosette Middle School GSA student.

LGBT folks, and stories featuring LGBT characters, are well known to Wattpad. “There are over 4.5 million original story uploads for LGBT and related tags,” said Wattpad’s Head of Community Marc Shewchun. “Last month, people spent over 830 million minutes reading LGBT stories on the platform.” The LGBT community even has its own page so it’s easy to find LGBT peers.

“On Wattpad, people see themselves in the stories they read. It’s entertainment that reflects the diverse experiences and interests of people around the world, including the global LGBT community,” said Shewchun. “We know that stories are a safe way to explore ideas and themes people might not be comfortable expressing in real life. Wattpad affords people anonymity without sacrificing their personal connections with others around the world who may be going through something similar.”

A service for all kinds of people looking for support, 7 Cups has trained listeners and a LGBT forum to provide a safe place for young people to be heard and supported. “7 Cups is a support group for depression, and they have an area specifically for LGBT [people],” says a Geneva Community High School GSA student from Geneva, Illinois. “You can talk to people and get encouragement from them.”

7 Cups has a one-on-one listener service to connect users anonymously with trained support people when they need to talk, or users can access the 24-hour chat room designated for LGBT teens. “The LGTBQ+/MOGII community is a rich source of connection, sharing, and understanding,” says 7 Cups’ Laura Small. “For young people who are coming into themselves, we provide a safe haven to explore and ask questions.”

AVEN, the Asexual Visibility & Education Network, exists to connect asexual people, an often underserved community. Started by David Jay in 2001, the site includes tons of information for those who identify as asexual and their allies, including FAQs and links to other great resources around the Web. “AVEN is an asexual-specific site,” says another Geneva Community High School GSA student. “Which is nice because we sometimes feel unaccepted at other LGBT sites.”

Through its robust forum section, AVEN provides a network of support for young people to have conversations on identity and sexuality where they can make connections with others who are like them. “We feel people deserve a place in which their sexual, romantic, and gender identities are accepted,” says Michael J. Doré of AVEN’s Project Team. “Sometimes people’s identities shift over time, which is fine—that is for themselves to discover—and we hope AVEN is a good place for people to explore such things.”

The Trevor Project is known for their LGBT suicide-prevention efforts, but that’s not all they do. They also maintain TrevorSpace, a social networking site exclusively for LGBT youth and their friends between the ages of 13–24. “TrevorSpace is kind of like this interesting mashup of [the] personal profiles and private messaging of Facebook combined with [a] central community hub of discussion forums where young people can talk about anything they want,” says Routh. “It’s purely centered around the lived experiences and the struggles and triumphs of young people who identify as LGBT.”

All those who sign up for an account must be approved. The site is moderated by trained Trevor Project staff to ensure users adhere to the community guidelines that keep the site safe. The Trevor Project recommends newcomers to the site make a post on the introduction subforum, and participate in regular forum discussions on favorite topics to find others and grow their own social network within the closed community.

“So I made an account on TrevorSpace.com, and it is just the best website for LGBTQ people,” says Justin on Tumblr. “If you are LGBTQ, I highly recommend you make one!”