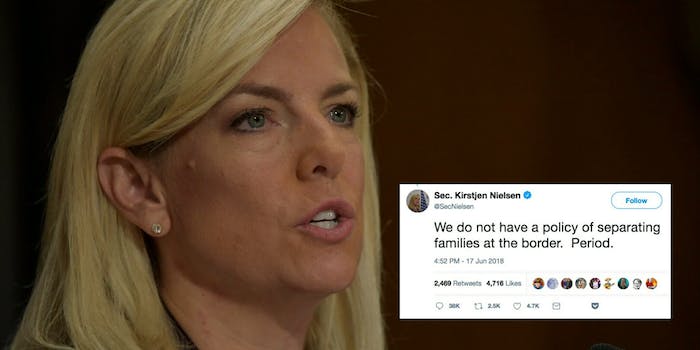 The Trump administration is doing its darnedest to spin this travesty—and people aren't having it.

Don’t let the outraged 24-hour news cycle fool you about families at the border. The Department of Homeland Security (DHS) is now saying it doesn’t have a policy to separate them—except when it does (like when Jeff Sessions announces such a policy), according to a thread of confusing, contradictory tweets written by Secretary Kirstjen Nielsen.

On Sunday, DHS Secretary Nielsen tweeted the exact opposite of what other government leaders, Congress members, and journalists have been verifying for months: “We do not have a policy of separating families at the border. Period.”

We do not have a policy of separating families at the border. Period.

“This misreporting by Members, press & advocacy groups must stop. It is irresponsible and unproductive. As I have said many times before, if you are seeking asylum for your family, there is no reason to break the law and illegally cross between ports of entry,” Nielsen wrote in a larger thread of tweets encompassing the false allegation about family separation. “You are not breaking the law by seeking asylum at a port of entry.”

It’s unclear what Nielsen defines as a “policy” in the context of her tweet. No, the department does not have a hard and fast rule stating “separate all immigrant families who cross the border without documentation, no matter the circumstance.” But, as Nielsen later tweeted in the thread, it does have a policy of separating a child from an adult family member “if the adult has broken a law.” In this case, under Attorney General Jeff Sessions’ “zero tolerance” policy to prosecute all adults who cross into the U.S. from Mexico without authorization, all adults are detained to be tried for “breaking a law.”

Family separations occurred even before Sessions’ early May announcement clarifying the Justice Department’s commitment to “zero tolerance.” As Nielsen tweeted, children were separated from their families if, “the child is in danger, there is no custodial relationship between ‘family’ members, or if the adult has broken a law.” Regardless of “hard and fast” policies, a policy to separate families is in place.

Under the “zero tolerance” policy prosecuting all adults illegally crossing the border, their children are separated from them and are separately detained. They’re then reassigned to be in the care of a sponsor, typically a family member already residing in the U.S., or are housed in a private child detention center through the Office of Refugee Resettlement. It’s that simple. The policy exists, regardless of whatever narrative Nielsen is trying to build around lying press and members of Congress.

Nielsen’s lie, or at the very least, misrepresentation of the truth, follows a Friday call between the DHS and reporters. During the call, DHS told reporters that from April 19 to May 31, beginning weeks before Sessions’ “zero tolerance” policy announcement, DHS had separated 1,995 children from adults facing federal charges for crossing into the U.S. unauthorized.

Of all the tweets in Nielsen’s Twitter thread, it’s her assertation that there are no border separation policies that has gotten her thoroughly “ratio-ed.” In other words, the people outraged by her comment have responded to that specific tweet in droves, racking up an impressively angry 39,000 replies in comparison to the tweet’s 2,500 retweets and 4,800 likes, as of this reporting.

Many critics were quick to call Nielsen’s tweet a lie, others dancing around the statement with variations such as “flagrantly dishonest,” accusing her of purposely spreading misinformation.

As journalists who deal in facts we have an obligation to say that this is a lie. https://t.co/zAeF4txwDD

DHS held a press call on Friday and said they split 1,995 kids from adults at the border since April 19. DHS acknowledged the family separations and explained the policy change that, in any case, AG Sessions publicly announced last month. This statement is flagrantly dishonest. https://t.co/pITjDFgN1v

Dear @SecNielsen: You are lying. Period.

How do we know you are lying Sec Nielsen? Because Stephen Miller pushed for the policy change & AG Sessions gleefully announced it.

Also, 2000 kids didn't voluntarily decide to leave their parents. You forced the separation. Get it? https://t.co/BNqyZa7P7D

The use of "Period" is Kirstjen Nielsen's way of signaling this is a hostage tweet. After all, what previous Trump Administration official famously used this term? Sean Spicer, when he was defending a lie: "This was the largest audience to ever witness an inauguration, period." https://t.co/WNxxzllZrC

So who is separating those families at the border then? Please Madame Secretary don't treat the American people like idiots. Defend your policy or change it. But don't try to misrepresent it. https://t.co/Zh3eG8Kqv5

You are a fucking liar and I hope you rot in hell. https://t.co/PUaCERYQGj

Yes, technically YOU are not at the border separating families YOURSELF. You are in charge of a policy that turns parents over to DOJ, resulting in the separation of children. You know this, and still – incredibly – sent out this tweet. https://t.co/CikreZ286K

This is a lie. There is no law. There is no court mandate. This is a policy made solely by this administration, and you can stop it right now. And every second you don’t you are directly responsible for unimaginable amounts of misery. Period. https://t.co/nf0lF9VEoO

With any hope, today’s White House press briefing with Press Secretary Sarah Sanders will bring some clarity to Nielsen’s comments (or not).

any WH reporter deserving of the job will spend all day tomorrow calling out this heinous lie https://t.co/KGz6eZ2jDJ

DHS’s Office of Public Affairs did not immediately respond to the Daily Dot’s request for comment.

Update 12:26p.m. CT, June 18: Speaking in New Orleans for the National Sheriff’s Association annual conference on Monday, Nielsen said the Trump administration and DHS would “not apologize” for doing its job, and would not automatically assume that all families coming to the U.S. are actually families. Nielsen said DHS has asked Congress for expedited deportations of unaccompanied children regardless of country of origin and to keep families together in detention

“From October 2017 to this February, we have seen a staggering 315 percent increase in illegal aliens fraudulently using children to pose as family units to gain entry into this country. This must stop. All this does is put the children at risk. To address these issues we’ve asked Congress to change the law to allow for the expeditious return of unaccompanied children, regardless of their country of origin. We are also asking Congress to allow us to keep families together while they are detained,” Nielsen said.