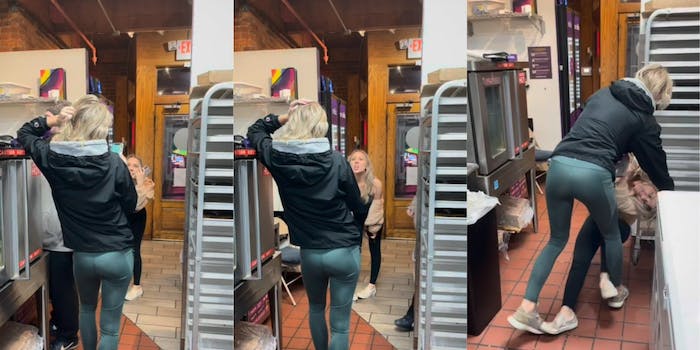 ‘Promoted from anti-masker to floor mop’: Worker subdues Karen who tried to hit her in viral video

The poster said the Karen was later arrested.

A viral Reddit video shows a Karen getting physical with an Insomnia Cookies worker, allegedly over being asked to wear a mask.

u/botch-and-soda posted the video to Reddit’s popular r/PublicFreakout subreddit. According to one commenter, the footage shows a Karen being “promoted from anti-masker to floor mop.”

“Take a video of me calling you a cunt, because that’s what you are,” the Karen began, going in on a woman that apparently denied her service. “You’re a fucking cunt. How ’bout that, huh?”

The worker records the woman as she’s yelling. As she goes on about being filmed, the person filming lets everyone know that “there’s gonna be a sheriff here in about five minutes.”

The Karen continued: “I guarantee someone has told you before that you’re a fucking cunt.” While all this is being said, the employee of her ire was relaxed, leaning on an appliance.

The Karen kept insulting the worker, calling her a “loser” and a “fat-ass” as she got closer. Karen suddenly took a swipe at her, which prompted the employee to defend herself.

She initially pushed the Karen away, but Karen charged at her again. The employee then pushed her down to the ground and the video cut out. The poster stated in the comments that the incident occurred in Athens, Ohio and said the Karen was arrested.

One commenter asked, “Why are the people in these videos always screaming and wiggling around??? if you’re gonna yell at someone, at least stand still.”

Another joked: “Lookin like LeBron James handling a basketball the way she grabbed that girl’s head with one hand and slammed her to the ground 😂😂😂😂😂.”

The Daily Dot reached out to the redditor for comment.