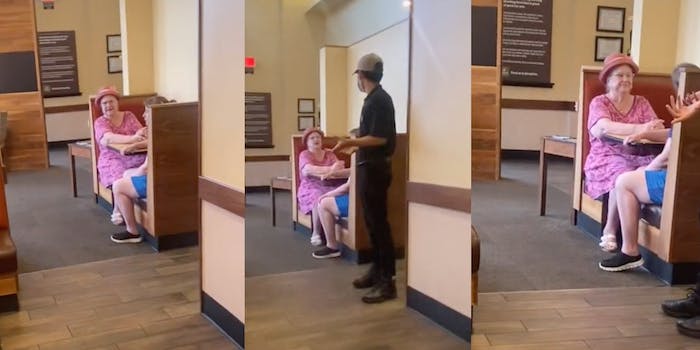 ‘Why is she acting like there’s a dress code?’: Karen shames TikToker for her outfit at Panera Bread

'When are these Karens gonna learn to MYOB??!!!'

A woman was shamed for her outfit—a top and shorts—in a California Panera Bread. She’s taken to TikTok to share her experience with a Karen who criticized her outfit, saying she was dressed “like a whore.”

The Karen—an older woman eating at the restaurant in what commenters have called a “nightgown”— spends the length of the video telling TikToker @amiri.xo in many ways and words that she disapproves of her outfit on that hot day. The video has since garnered 1.5 million views.

Commenters remarked that what the woman who was criticizing her was dressed in a way that didn’t give her a whole lot of room to talk—they said it looked like a nightgown.

Another compared the gown to a cartoon character from the well-loved children’s program, “The Proud Family.”

“Not her dressed like Suga Mama from the ‘Proud Family!'” the commenter wrote.

Being that they were all eating in a Panera, this commenter questioned why the older woman thought there was a dress code for the fast-casual restaurant.

Other commenters thought the woman should have been minding her business, and that she had no reason to criticize her.

“IDK what you were wearing but I don’t have to see it to know it’s no one else’s business,” they wrote. “When are these Karens gonna learn to [Mind Your Own Business]?”

Others still commented on what the woman said to @amiri.xo—that young people have no respect for their elders. They pointed out that her own behavior was less than respectful.

“‘You young people have no manners,'” one commenter wrote. “*proceeds to go out of her way to insult a stranger she doesn’t know for absolutely no reason*”

The Daily Dot has reached out to @amiri.xo about the video.