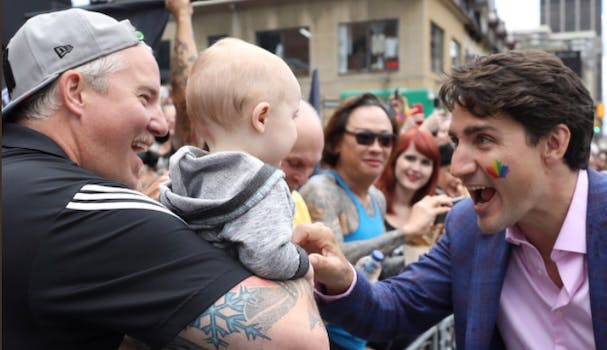 On Sunday, members and allies of the LGBTQ community marched in Pride parades across the world to show their enthusiastic support for gay rights. If you have never been to a Pride parade, they are raucous and ostentatious affairs, as people loudly and enthusiastically boogie down major city arteries. And yesterday, the internet’s most woke bae, Canadian Prime Minister Justin Trudeau, joined in in the fun. At a Pride parade in Toronto, Trudeau gave the community his all.

Pictures of Justin Trudeau at Pride are making the world jealous https://t.co/OHRUVhpfaB pic.twitter.com/0UbWUkU8Km

Yes. That is rainbow-colored face paint on the prime minister.

Trudeau at the Toronto pride parade is just too pure pic.twitter.com/dP8kiCoZDV

This is the second year Trudeau participated in a Pride parade, and he may have been even happier last year.

Just look how happy he was.

Sunday also marked the end of the Muslim holy month of Ramadan, and Trudeau’s rainbow colored socks included a nod to the important day.

Earlier in June, as part of Pride month, Trudeau also raised the Pride flag over Canada’s Parliament Hill, only the second time the country has ever done so. Trudeau also announced his intention to pardon those arrested and charged under the country’s old, regressive, anti-LGBTQ laws, which have mostly been repealed.