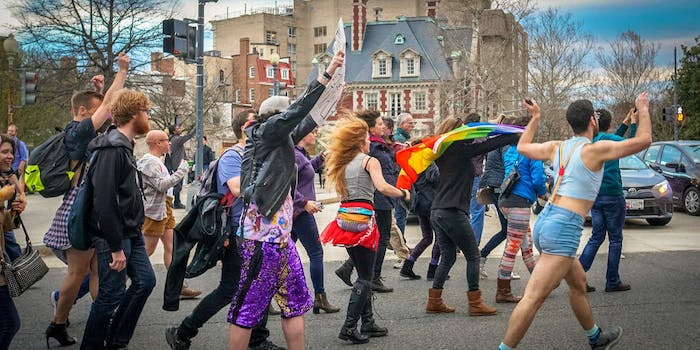 The pride and pitfalls in LGBTQ labels

Sometimes the specificity diminishes the fluidity.

There are now so many different labels for sexual orientation and gender identification, it can get quite confusing for the uninitiated. Even the word “queer” has gone from derogatory slur to reclaimed, all-encompassing umbrella for the LGBTQ community in the past few decades.

But while younger generations are more fluid, both gender and sexuality wise, how a person wants to be labeled is what remains most important—in fact, some are still offended by “queer” because of its history. All those acronymic letters describe very specific things that people fought long and hard to be recognized for.

What does LGBT stand for?

In the simplest of terms, LGBT stands for lesbian, gay, bisexual, and transgender, but it’s not that simple, and most prefer to add Q to the acronym for “queer.” According to Ms. Magazine, we can thank the feminist movements of the 1960s and ’70s for moving the needle on the differentiation between identifications. Prior, everyone who wasn’t straight or cisgender was simply labeled “gay.” However, women wanted a word that was more personal and unique to their identification, pushing for visibility by coining “lesbian.”

It wouldn’t be until the 1990s, though, that GLBT would become a term, including both bisexuality and folks who are transgender (note that transgender doesn’t even refer to a sexual orientation but to a gender identity that doesn’t align with a person’s birth sex). In the mid-2000s, that acronym would be slightly modified, leading with the “L” for visibility purposes.

Nowadays, of course, the word “gay” is mostly just associated with men who have sex with men (MSM). For many, it’d be odd, even delegitimizing, to simply call men interested in both men and women “gay”; same for women interested in women, or transgender people in general, since their sexual orientation has nothing to do with their gender. Our lexicon has expanded to include such words that describe with specificity how folks identify. This means getting personal and prideful.

The restrictions with labels

However, sometimes being too specific isn’t specific enough in capturing the range of how individuals identify. A recent GLAAD survey found that 20 percent of millennials identify as LGBTQ, but that they are less likely to identify with more traditional labels like “gay/straight” or “man/woman.” For some, a combination of labels is the best option.

“I go back and forth between ‘gay’ and ‘queer.’ I think for me, ‘gay’ is a sexuality and ‘queer’ is more of a political expression, and it depends what I’m trying to convey,” Peter from New York says. “Gay” works as a clean-cut description of his sexual activities, whereas “queer” is more of an ideology that umbrellas that lifestyle, making for a culturally aware and sensitive mindset.

“If I don’t want to have a nuanced conversation with someone, then I identify as gay. In more ‘woke’ circles, I’ll identify as queer. For me, queerness transcends MSM. It’s how I choose to express my gender and sexuality, an understanding of gender-politics in society, and the political beliefs I may possess because of that,” Peter continued in a sentiment endorsed by many with whom I spoke.

Indeed, no longer should sexuality and its lack of parameters be something to be intimidated by. In a noteworthy Sex and the City episode in the early aughts, Carrie dates a bisexual man only to become paranoid and jealous of other women and men. Now we live in a time where that fluidity is not only more accepted but attractive.

“To me, what matters is personality and how I mesh with someone,” a bisexual woman named Kat explains. “Lesbian” would not only just scratch the surface, it would also create a box.

“Call me bisexual, if you wish,” Jon from Vermont laughs. “It’s not that it matters much to me whether I am branded one way or the other. I just know that we all have male and female energies within us. How much we are attracted to one energy more than the other might determine what we identify as.

The larger meaning behind labels

Of course, we’ve all seen the unnecessary rants on social media from people who feel that the LGBTQ community is turning into a jumbled alphabet soup of letters that represent our inclusivity. As recent as 2013, as noted in the second edition of Sam Killermann’s Guide to Gender, the acronym expanded to LGBPTTQQIIAA+. The very inclusive mouthful breaks down to Lesbian, Gay, Bisexual, Transgender, Transsexual, Queer, Questioning, Intersex, Intergender, Asexual, Ally, and Beyond. So, yes, even our straight allies get included in the rainbow. This is why, as followed by the addition of “queer” to the acronym, some prefer to simply tack on a plus sign, making the term “LGBTQ+.”

“I think the world is going label mad,” Max from the U.K. expresses. But he also sees the significance in the inclusion, even if at the end of the day, someone with a sexual minority may not even identify with any of the LGBTQ labels. “Why would a trans person [interested in the opposite sex] even identify with GLB?”

Besides the personal identification, some see the labels as an important step toward building community and overall awareness. “I think that labels are important for a lot of reasons,” says Ally, a trans woman from Boston. “They help people shape their identity and help find community… It starts to open up the understanding that both gender and sexuality are spectrums.”

After all, the LGBTQ community has worked toward acceptance and visibility for a long, hard time. Inclusivity and respect over how we identify should continue to be important if we want to lift each other up.