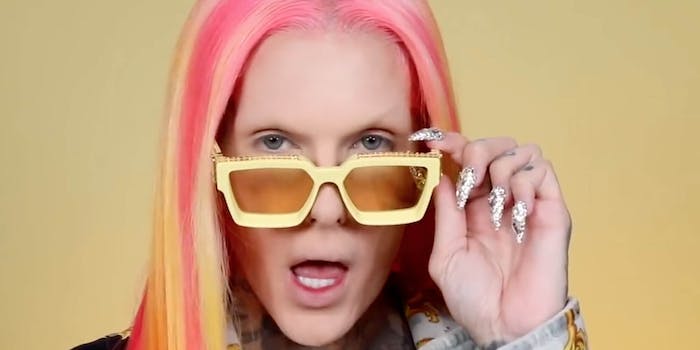 The racially insensitive YouTube star, makeup artist, and musician Jeffree Star recently split from ex-boyfriend Nathan Schwandt; however, that might not last long. Star revealed this week that there are multiple NBA players up in the DMs at the moment.

When a basketball fan caught Jeffree’s height on the internet, they tweeted with a homophobic joke: “Jeffree Star is 6’1?? Bro was playing with the wrong balls.”

Jeffree replied with an eyebrow-raising quip: “There are currently three NBA players in my DM’s right now, but thank you for the concern.”

Star’s comments made it hot online for, apparently, a few NBA stars and sent NBA Twitter into a small firestorm.

It would be ridiculous to believe that the NBA, or any major or minor sports league in the world, has no queer athletes—it would be statistically impossible. However, many still can’t wrap their heads around the notion of a gay male athlete, especially one who is currently playing.

It’s this negative stigma that keeps queer athletes, especially in the major leagues, from coming out during their careers. In fact, amongst NBA alumni, only John Amaechi and Jason Collins have come out. In 2013, Collins was the first to come out as an active athlete within the four major North American professional team sports, though he was at the tail end of his career.

However, whether Star’s claims are true is another matter. He has a sordid history of saying, doing, and claiming outrageous things. He was most recently called out for cultural appropriation in a new ad campaign and later challenged for recent photos and videos of himself on Snapchat, wearing cornrows in his hair.

Star has also been called out for saying the N-word but says he’s not a racist. Many on social media view his subsequent actions as inconsistent with his words.