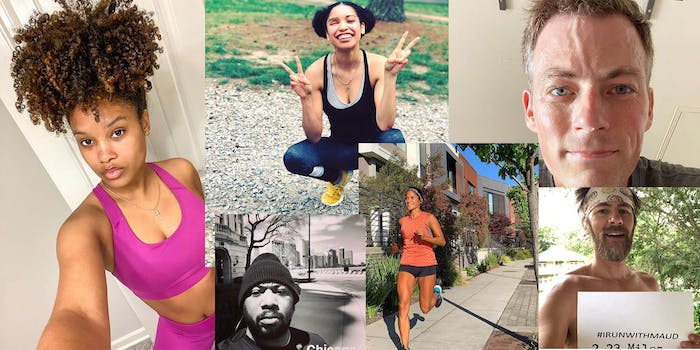 They're using the hashtag #IRunWithMaud on what would have been his 26th birthday.

The hashtag #IRunWithMaud is trending on Instagram as people post pictures of themselves running to show support for the unarmed black man, Ahmaud Arbery, who was gunned down by two white men in broad daylight during his daily jog.

The father and son claimed he “looked like the suspect in a string of nearby break-ins,” according to the New York Times. He would have been 26 today.

Supporters are running 2.23 miles, representing the day he was killed, Feb. 23. It wasn’t until May 7 that the father and son who murdered him were arrested––two days after the video of his death was made public.

After the video began to go viral, it sent shockwaves of national outrage as the two suspects were not arrested for two months. Many prominent figures like former Vice President Joe Biden, NBA star LeBron James, actress Gabrielle Union, actress Viola Davis, and many more have expressed their outrage over the shooting.

On what would have been his 26th birthday, people are using the hashtag #IRunWithMaud and sharing their thoughts and outrage over the shooting that left this unarmed man dead.

“It’s been like a month since I’ve ran….truthfully haven’t been motivated. But today…today I ran,” one Instagram user wrote. “Today Ahmaud we run for you, we remember you. Being gunned down while you exercise is something no one should ever worry about and yet here we are.”

Social media influencer Libby Christensen wrote on Instagram, “Today’s workout was a 2.23 mile run in support of #AhmaudArbery who was shot & killed in broad daylight on February 23, 2020, by two white supremacists (a father & son) one of which was a former Georgia police officer.”

According to the New York Times, “Law enforcement officials in Georgia said on Friday there was more than sufficient probable cause to justify charging two men with murder in the fatal shooting of Ahmaud Arbery.”