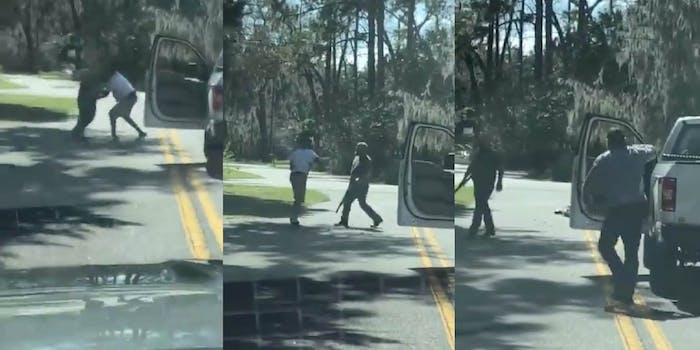 'Please do all you can to ensure justice is done here.'

After a video went viral of two men shooting a Black jogger in Georgia, a district attorney in the state is now vowing to bring the case to a grand jury.

In the video recorded in February, 25-year-old Ahmaud Arbery is seen running through Brunswick, a suburban neighborhood in southern Georgia. Someone in a car behind Arbery filmed the video.

After what looks like the third shot, Arbery tries to run away and is seen limping a few steps and then collapsing on the ground. Police say he died at the scene.

The two white men from the truck were identified as Gregory McMichael, 64, and his son Travis McMichael, 34. The father and son claimed they thought Arbery was a “burglar,” who had been caught on cameras breaking into homes in the neighborhood.

When they saw him running, they decided to grab their guns, to chase him in their truck, and to perform a “citizen’s arrest.” The father and son said they shot Arbery in self-defense.

Arbery’s family said their son did not commit a crime and that he was unjustly killed on his daily jog.

Earlier this week, a radio station in the region released the cellphone video from the bystander. It was shared widely on Twitter. Politicians throughout the U.S. tweeted about Arbery getting gunned down.

“The video is clear: Ahmaud Arbery was killed in cold blood,” Democratic candidate for President Joe Biden wrote on Twitter. “My heart goes out to his family, who deserve justice and deserve it now. It is time for a swift, full, and transparent investigation into his murder.”

After the video gained national attention, District Attorney Tom Durden said in a statement posted to Facebook that he will be taking the case after “careful review of the evidence.”

Two other district attorneys recused themselves with the case for having a connection to the father, Gregory McMichael, who was a retired investigator with the district attorney’s office in Brunswick and a former officer in a local police department, according to the Root.

Many shared their thoughts on Durden’s Facebook announcement, leaving comments like, “We are watching” and “As the DA, please do all you can to ensure justice is done here.”